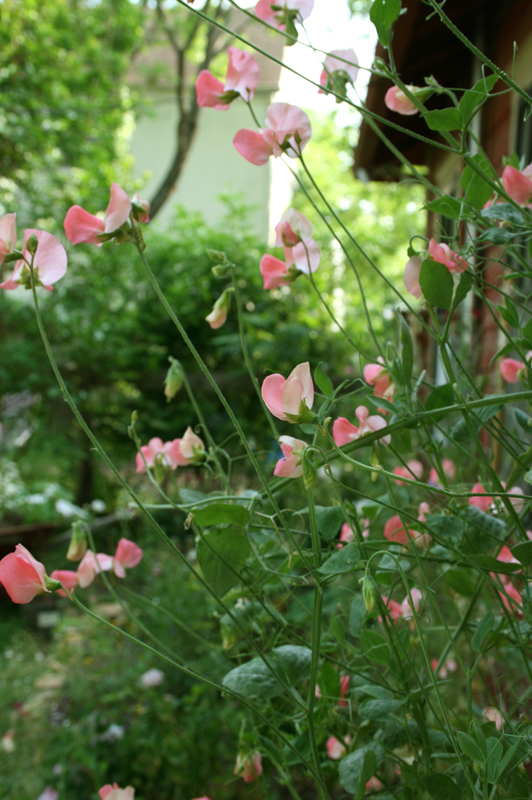 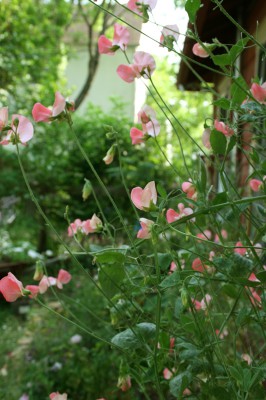 As I am writing, the Christmas lights on my street are drawing passersby from all over Austin, we had our first sprinkling of snow in five years, and the weather has gone from a glorious 78 degrees, to windgusts and below freezing in a matter of a few hours. This was the year I finally decided to leave my Meyer lemon tree permanently outside in a beautiful bronze ceramic pot, and I fear that last night was its death.

This is the odd season we call Winter in Austin, mild enough to have a winter garden, roses blooming at New Years, but cold enough to run outside every other day protecting plants which have been coaxed into tender growth by warm spells then hit by sudden and caustic drops in temperature. On this day, December 10, in the freezing rain, I have lightly fragrant red sweet peas blooming.

Sweet peas are usually considered a spring pleasure, or in England and the milder summers of the U.S., the star of the summer annuals. You don’t normally see them on the cover of magazines in the fall or winter, but those are the times we grow them here in our funny climate.

Most sweet peas need lengthening days that occur in spring and early summer to initiate their blooms. In science this is known as “photoperiodism”, a biological response to changes in daylight or length of night. Strawberries, for instance, are the opposite of sweet peas, “short day plants” that won’t flower (or fruit) unless the days are shortening and prefer to wait until the longer nights of late summer and fall.

Most sweet peas, including the earliest and wild sweet peas, simply will not bloom in winter no matter how hard we try. In Texas we have the advantage of warm winters with higher light levels, which means they will bloom earlier here than, say, England or the midwest, but often the trouble comes in our springs which are unpredictably short and shoot up to extreme temperatures which sweet peas do not like.

Thankfully, there are exceptions to this, sweet peas which not only bloom earlier with shorter day lengths, but a few which flower with no care to day length at all. (In terms of photoperiodism, a plant is considered “daylength neutral” when it flowers regardless of the night or day length.) These are the kinds most worth trying out here for the longest bloomy season possible.

The first known “early” sweet pea was actually discovered in the U.S. At the time most sweet pea breeding was exclusive to England. A woman growing the antique Painted Lady in her Upstate New York garden saved and grew her own seeds year to year. Over time, her Painted Lady developed stouter and more compact growth. She sold her selection to the then-new D.M.Ferry Company (now known as Ferry-Morse), and it was released as “Blanche Ferry” in 1889. It was the first sweet pea to come from the U.S. and also the first to appear in full color in an American catalog.

According to Graham Rice in The Sweet Pea Book, a couple of years later the Ferry company noticed in their trial gardens that some of the Blanche Ferry plants were blooming earlier, so they released these as a separate kind called “Extra Early Blanche Ferry”. From then on American seed companies were fascinated with these early-girls; there was “Earliest of All Blanche Ferry” and “Extreme Early, Earliest of All”. Original names, no?

While most of these have been lost, I have grown both Blanche Ferry and Painted Lady; they are very similar in coloring except Painted Lady has a more diminutive size typical of the antiques, and ironically blooms nearly two months before Blanche Ferry. Go figure.

Winter-blooming sweet peas are mostly descended, in some way or another, from Blanche Ferry. (Blanche Ferry went on to parent the Cupid and dwarf sweet peas, as well.) There was never much of a home-gardening market for early-bloomers, since the Spencers (which tended to bloom later) were not only more developed in their forms and colors but also grow more in tune with the seasons in England which was the heart of sweet pea breeding. The early blooming Blanche Ferry flowers also tended to be weak when grown outside so they were restricted to greenhouse growing for most gardeners or companies.

In the early 1900s, California breeders worked on early sweet peas mostly for the cut-flower market. In England these are often known as the “Early Spencers”. The “Christmas” series were among the first true winter-flowering sweet peas. The Cuthbertson Floribundas (bred by the same company which first released Blanche Ferry) were considered early spring-flowering. The Early Multiflora Gigantea series were spring-flowering crosses of the Cuthbertsons with the Christmas strains. Many of these varieties are no longer in commerce, although growers still use what is left of their strains in their breeding of early and florist sweet peas. 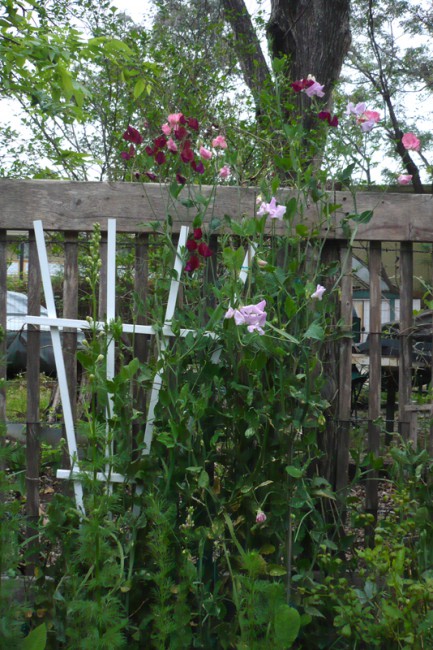 There are, though, other “day-length neutrals” floating about the world. Last spring, on a whim, I ordered seed of a series called “Winter Sunshine” from Owl’s Acre in England, and despite sowing them in February, which is far too late here, I was surprised by how quickly and strongly they grew and bloomed, and also seemed more fragrant than some of the Winter Elegance flowers. This year I’m growing them more properly from the fall on. There are also winter-blooming kinds from Australia, Holland and a newer series from the breeder of Mammoth, but I have been unable to find them yet.

In any case, we often have enough light in winter to have the spring-blooming Cuthbertsons and Mammoths blooming, so the “day-length neutral” kind aren’t necessary. They may possibly bloom as early as December if the temperature is mild enough (and if you sow them early enough).

Unfortunately, since the emphasis in these has been on cut flowers and not so much variety for personal gardening, most of the early bloomers don’t have all the snazzy designs like bi-colors, picotees or ruffly blooms. And many of them have a barely distinct fragrance. I sense an opportunity here–breeders, are you listening?–there are legions of gardeners in the South or the mild climates of the West that would leap at variety or even just a hint of the old fragrance in Winter sweet peas.

Not every sweet pea fits into a neat seasonal category. Even some of the Winter Elegance colors bloom later than others in the series, while some Grandifloras and Spencers which are traditionally considered summer-flowering (vs. spring or winter) include the occasional early bloomer. These are worth searching out for our climate. Roger Parsons, a well-known English sweet pea breeder and preserver of old-fashioned varieties, is working to reselect some of the older early varieties, and on his site includes a list of individual earlier-flowering sweet peas to try.

I should add that, even if you find all the winter-growing sweet peas that your garden can fit, it’s still worth it to leave some room for an extravagantly-perfumed antique. While many Grandifloras and antique sweet peas are often suggested to be more “heat-tolerant”, they still bloom late enough in Texas to be a cautionary experiment; our heat is not normal heat. But still. Even just three weeks of one heavenly sweet pea is enough for me. We are satisfied with that much from a rose, so why not a glorious but ephemeral sideshow from the original Cupani or maybe and April in Paris (a modern Grandiflora)?

And finallyl, if you are going to save your sweet pea seeds, as I hope to, it’s important to save from the earliest flowering seeds, as it’s possible they can start reverting to dominant sweet pea trait of late-flowering. If you’re not as obsessed as I am, it’s better to buy fresh seed from a reputable seed company:

I adore these gorgeous flowers and have scoured articles and books for something more than just a cursory amount of sweet pea information for a hot-climate gardener. You never know, some day I might have a home-garden breeding program of my own. And yes, you can interbreed your own sweet peas!

And if you’re a Texas gardener, please keep checking back to my Sweet Pea page, which shares which varieties have fared better than others in my garden.