The Romance of Sweet Peas 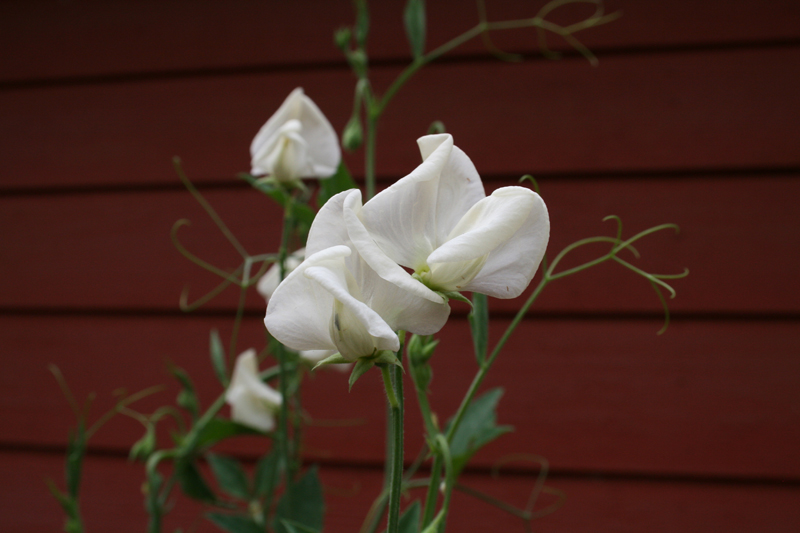 Someone should have warned me about romance in the garden. In pictures, in catalogs, in nurseries–all it takes is a bit of romance about a flower and you must have it. Somewhere, anywhere.  You might not know how big it gets, or if it works in your climate. Who cares? It’s like trying to get those amazing shoes to fit when they only had one size left.

And yet unlike the expensive romance of vintage clothing, or furniture, or any other object with a historical, mysterious beauty, plants are quite cheap. Seeds are cheap. And so it goes with sweet peas. I started reading about them, and they had such an illustrious history, a vintage air, and were the province of any respectable cottage garden. Even ‘cottage garden’ sounds romantic, and that’s how we innocent gardeners get hooked.

Sweet peas are hugely popular in England and were even more so 100 years ago. There were and are sweet pea societies and sweet pea show gardens, sweet pea trials. It seems that no description of sweet peas is complete without telling their story. (We don’t often hear the history of irises, or pansies, or carnations whenever we set out to buy them–one has to go digging.) Perhaps it’s because (I think) the English are quite romantic about their flowers, and sweet peas have often been called the “Queen of the Annuals” there. And perhaps because we all have a romance with Italy, which is where the story begins.

These fragrant, butterfly-like vines were first discovered in Sicily by a Franciscan monk in the late 1600s. Of course they had probably been ‘discovered’ before, but Francisco Cupani was their first recorded grower, and sent seeds to a Dutch botanist and to England, where they became a popular garden flower. 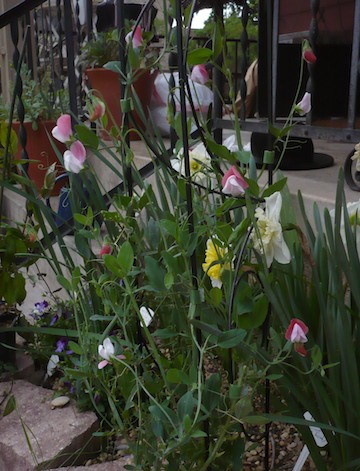 For many years the original wildflower was sold to gardeners along with a few other colors related to the original’s purple and wine blooms.  Of these original colors, a few are still available to gardeners, including the original which is commonly sold as “Cupani” or “Cupani’s Original” and another bi-colored pink and white sweet pea called “Painted Lady”, discovered as a sport of the original in 1730.

It wasn’t until the late 1800s when sweet peas became a passionate subject of breeding; until 1881 there were only 21 varieties but by 1900 there were 264. Henry Eckford was the most prominent breeder at the time, creating almost half of those 264 sweet peas, which had more flowers per stem than the earlier kinds, and so they were appropriately called “Grandifloras”. Now they go by that name, along with “Eckford types” and the more elusive “Old-fashioned”.

Again in 1900 the sweet pea world radically changed when Silas Cole, a head gardener for the Spencer family (yes, of the Princess Diana lineage!) introduced a new kind of sweet pea–and to considerable sensation–at the British Sweet Pea Bi-Centenary Celebration. Cole was clever enough to hide his table display until moments before the exhibition deadline, keeping people waiting and wondering what this new exotic sweet pea development might be. His “Countess Spencer” became an instant hit, with its larger-than-usual flowers and wavy, frilly petals, a whole new form.

Sweet peas became such a rage that every new form and color, regardless of its lastingness in the garden, was greeted by horticultural frenzy. When the first “dwarf” sweet pea was discovered in 1895 in California, and soon after a pink and white version of it, the U.S. seed company Burpee paid $1500 for the entire stock of 1068 seeds! At nearly $1 a seed, such a price seems ridiculous even now.

And while breeders carried on with the Grandifloras for some time after that, the fascination with developing Spencers soon sent them into near obscurity. Sweet peas are now bred mostly in America, New Zealand, Japan and of course England, with the vast majority being Spencer-types. One of the main characteristics of the Spencers, other than their form, was the fact that they tended to bloom later than the Grandifloras, and were much more suited for mild summers.

On the other side of the sea, Americans had been growing both Grandifloras and Spencers, but by the mid-1900s, U.S. breeders set out in other directions. A home gardener from upstate New York growing “Painted Lady” saved seeds over the years, and eventually came up with a unique strain. It was released in 1889 as Blanche Ferry and had the distinction of blooming much earlier than many other sweet peas. Eventually it became the parent of many winter-flowering sweet peas, which were at first classified as “early Spencers”. These were a boone to cut-flower industry looking to grow sweet peas year-round, and have also become an alternative to gardeners with mild winters and hot summers, who are unable to otherwise grow them in summer.

Those sweet peas called “Cuthbertsons” were among the first of the winter-flowering types, and their most recent descendants are commonly sold as the “Royal” series. “Early Multiflora Gigantea”, “Mammoth” and “Winter Elegance” were later 20th century developments in winter or greenhouse-growing sweet peas.

And it seems that sweet pea lore is at another beginning; just as in so much art and design, there has been a return of interest to heirloom and old-fashioned plants and cottage gardens. In the last 30 years many breeders and seed companies have brought about a return in both the pre-1880s antiques and turn-of-the-century Grandifloras. The fact that something is vintage in itself makes me want to grow it; for me it is about history, a return to something lost.

Even as with roses, there are breeders trying to bring back what was best about the vintage kinds. In sweet peas, this means fragrance. Sweet peas without their fragrance lack what makes them so divine. The candy-apple, intensely sweet fragrance has no other comparison. Keith Hammett, a well-known flower breeder from New Zealand “rustled” wild sweet peas from Sicily to re-introduce the Cupani Original, and has used it along with many of the old Grandifloras to breed back the scent as well as new color-variety into Spencers. Beautiful subtle picotees, bi-colors, and bizarrely hologram-colored blooms have been amongst the most recent.

Although his “new-old” sweet peas seem promising to gardeners working in hotter climates, they still bloom late enough to be a cautionary risk for southerners. A few other sweet pea breeders have been working with Grandifloras again, and in recent years introduced many new varieties of both Grandiflora vines and their shorter dwarf-pea cousins.

Funny, for such a small flower (relatively speaking) on a vine that gets often messy and tangled, is subject to powdery mildew after just a few cloudy days, requires more trimming than many flowers in the garden, and of course has to be watered frequently at least in my climate… it is worth it all to see its butterfly blooms waving over your fence, waving their candy-sweet fragrance. And some will have to get close to appreciate it, but there’s no denying it, sweet peas bring romance to the garden.

Credit where credit is due: Once I read just a brief history, I had to know more. I read every website piece I could find, and then I discovered Graham Rice’s The Sweet Pea Book–a warm and writerly book about not only the romantic and at times zealous history of sweet peas but also beautifully photographed, detailed descriptions of hundreds of sweet peas still being grown. He is also unusually judicious, for a garden writer, in detailing all the potential situations and climates one would like to grow them in both England and the U.S.–including even a part for Texas. I have to say it is one of the gardening books stuck on my nightstand.

If you would like further information, I’ve written two other pieces on sweet peas, one on how to grow sweet peas with some hints for Texas, and another on winter-flowering sweet peas, which are particularly suitable for our climate.

Other places to visit:

Roger Parsons Sweet Peas cultivates Britain’s National Collection of sweet peas, over 900 varieties, and offers many for sale.
The National Sweet Pea Society in England is responsible for Sweet Pea trisls in the UK.
The Scottish National Sweet Pea, Rose & Carnation Society
Sweet Peas at the National Garden Bureau of the United States
Fragrant Garden Nursery in Oregon, specialist grower of sweet peas and a wealth of information