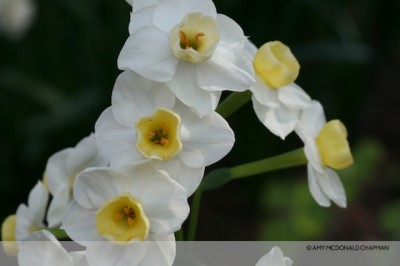 These are the cutest little flowers, not unlike ‘Grand Primo’, whose flowers spray out in more of a snowball shape, it can carry from 5 to 20 flowers from the top of each stem. Avalanche was once called “Seventeen Sisters” because of its frequent grouping of 17 flowers, but none of mine had even 10. Perhaps a few more years in the garden and I will see more. Avalanche’s blossoms are just a little bit smaller than Grand Primo, but the cups are distinctly, well, cups, and are also a clear yellow, which makes them look more like miniature daffodils and less like a paperwhite. For such a small flower, even from a distance, it looks so perfectly ‘buttercup’ (as I knew the as a child).

And then of course, for such a small flower, you wouldn’t believe the fragrance–yes it is that powerful tazetta fragrance, a little sweeter than the paperwhites and a little muskier than ‘Grand Primo’.

Tazettas are a group of narcissus that are known to bloom well in the South, blooming earlier than most other daffodils, and are distinguished by their multiple small flowers on each stem and thick leaves. Grand Primo is one of the most persistent in Austin, and returns in unamended clay soil so others are really just experiments but worth a try. The tazettas include relatives like paperwhites (Narcissus papyraceus), the cross-species Narcissus tazetta italicus, and Chinese Sacred Lily (Narcissus tazetta orientalis). These are all often forced indoors as well.