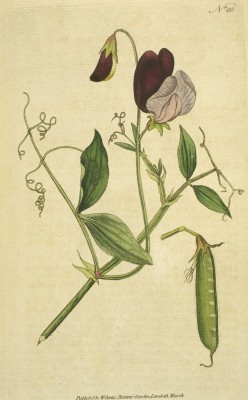 These lovely, childlike highly fragrant flowers have become already one of my garden obsessions. I ordered almost 30 different types of varieties by seed, while really only having room to grow about five. And this was never having seen a sweet pea before. But I am not alone, I have read many stories of other gardeners who fell to the same captivation by sweet peas, after seeing a photo in a catalog or gardening magazine. And I wonder why, for such a delicate flower?

Perhaps it’s their fragility and butterfly-beauty, but more beautiful than the flowers is their fragrance, which you can’t show in a magazine. They have an unusual, honeyed citrus blossom scent, almost candy-like.

Much has been written about sweet peas, lovely fragrant flowering vines in the pea family that are known abroad as the Queen of the Annuals. A wildflower native to Sicily and southern Italy, the sweet pea was once far more popular than it is now. As popularity of annuals declines in favor of self-sustaining gardens and drought-tolerant self-sowers, so does the elaborate range of choices in annuals that gardens once had at their whim. But there are just enough sweet-pea enthusiasts in the world to tempt us with the new and unusual, and some who are dedicated to restoring many lost, heirloom varieties.

Most sweet peas behave like small vines, growing five to ten feet tall, depending on the variety, although there are shorter types and even “dwarf” sweet peas for containers. Many of the heirloom antiques and Grandiflora sweet peas, as well as some of the new varieties in the old style, have more delicate stems and blossoms, while the Spencers and their progeny are very sturdy, thick and vigorous.

The best time to sow sweet peas in Texas is in fall, any time from September to November. Occasionally nurseries here will have sweet pea seedlings for sale in the late fall months. The best types for growing in Texas are winter-blooming types. A majority of Spencer-type sweet peas are too late-blooming to grow well here, as sweet peas do not like temperatures above 90 and we can have those in May. Many of the Grandifloras bloom later as well, and although they are often advertised as being more heat-tolerant, this doesn’t mean Texas-tolerant. I myself am barely tolerant of our heat.

Good types to try are Royals (also known as Cuthbertsons) or Winter Elegance types. They are often sold as mixes or sometimes in separate colors, but many of them bloom as early as January from a September sowing, or early February from October sowings. Painted Lady and Cupani are also good antiques to try, although Cupani blooms rather late, but as the original sweet pea is worth it even for two weeks for its ridiculously beautiful perfume.

Sweet Peas I have grown

Grandifloras and other antiques

Cupani or other sweet peas known as “Cupani Original” or “Original” are as close to the wild sweet pea as we can get. The fragrance is out of this world, the colors strong and luminous.

Painted Lady is along with Cupani one of the oldest sweet peas we have, dated back to 1700s. It has very diminutive flowers and stems compared to the modern varieties, but a potent fragrance. This grows well here and in my garden was the first to bloom, in January! I thought this might be a fluke but for two years now it has been the first to bloom in my garden. I adore this variety and have to say it is my favorite–fragrant, abundant and long-blooming.

Blanche Ferry: After doing some research I discovered that Blanche Ferry (the first sweet pea to be bred in America) was originally released as an early-flowering version of Painted Lady. Indeed, the two are very similar, but Blanche Ferry bloomed too late to really make it in my garden, later than most others. It seems as if the two have gotten horticulturally mixed up over the years. To test this theory, I’m growing them again but from a different source to see if Painted Lady continues to grow earlier.

Captain of the Blues: I wouldn’t call this a blue as much as a deep bluish purple that fades to a maroonish purple. The color ranges in this flower are similar to Cupani, but it is not a two-tone. It did quite well blooming in morning sun and afternoon shade, but did not begin blooming until April. 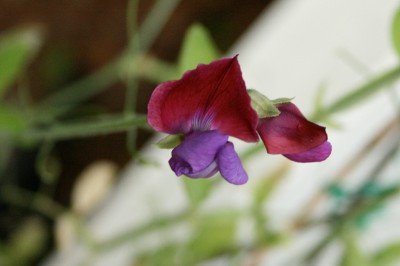 Matucana is so similar to Cupani that it has been often confused with Cupani as being the original sweet pea. Garden writer Graham Rice believes that Matucana was a 20th century discovery in Peru, probably the result of sweet peas from the Old World escaping garden cultivation in the New World, and appearing to have gone wild. It too is highly fragrant and I could barely distinguish it from Cupani, although I think Cupani has much more of a reddish maroon to its upper petal, while Matucana is more magenta.

Mrs. Collier is a lovely very fragrant heirloom Grandiflora in a pale cream, one of the first attempts to breed yellow sweet peas, which are still highly elusive. Thankfully my vines grew large enough by April to bloom beautifully for three or four weeks. It had much stronger stems than some of the older heirlooms like Painted Lady or Cupani.

I got one flower out of America, a quirky old-fashioned white with red streaks, before it choked and several others barely made it out before the heat or powdery mildew caught them first. Sad to say, I am not an expert on powdery mildew, but I am learning that with any kind of fungus you have to hit it before it hits you. Keep air flowing around your sweet peas, as you would roses. Don’t water overhead, and perhaps start spraying them with a mild organic fungicide early on. 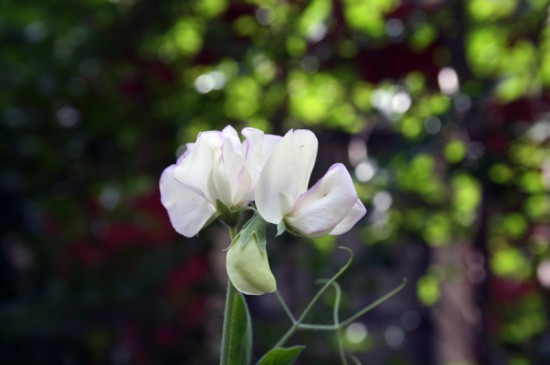 April in Paris is a more modern sweet pea that was bred in New Zealand to bring back some of the qualities of the old Grandiflora types into new sweet peas. It is very lovely picotee, a light cream with just a touch of lilac on the edges of the petals, and larger than the older sweet peas. Very, very fragrant, you can smell it yards away. It doesn’t start blooming until mid-April here, which means it has about a 2-week life if it’s lucky.

So far I haven’t had much luck with the shorter sweet peas, and I found both Cupid and Little Sweetheart to be too lacking in fragrance to be worth the way they scrambled about in the garden. Teresa Maureen, however, was worth a second try; although called a dwarf, while its vines appear more stout and compact it grew to about two or three feet in my container. It is a lovely flower with a bright lavender upper petal and white lower petals that are edged in lavender. It caught the powdery mildew in late winter before it even flowered so I was fighting off browning stems most of the time. 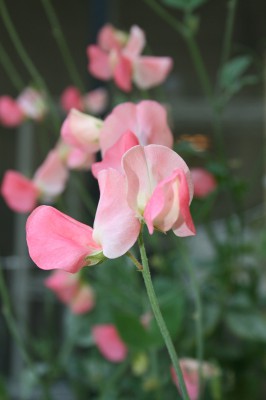 I tried many different varieties from the Winter Elegance series, including the Velvet Elegance mix and Regal Robe, which I think is also a Winter Elegance duet. You can buy all the Elegance series as single colors but they are most commonly found as mixes. While all of the mixes did rather poorly, which was probably where I planted them, the Salmon Cream took off and bloomed crazily in my garden, from February to mid-May. It is really pretty, an almost two-tone of light shell-pink and salmon-colored with cream undertones. Well, it’s not an inventive name, but a lovely very flower-y sweet pea that can grow to heights of 8 feet. Unfortunately, it’s not very fragrant.

Winter Sunshine series: This is a winter-blooming series from Owl’s Acre in England, and can only be ordered from them, but I bought a bunch out of curiosity. They are large and wavy and somewhat fragrant–some colors seem to be more fragrant than others. From an October planting, these started blooming in early February. My favorites so far are Scarlet, Lavender and Rose Pink.