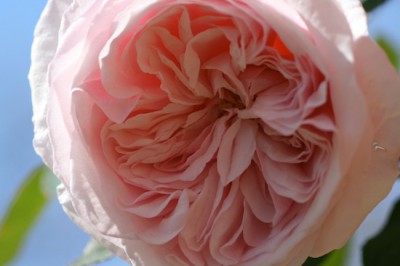 This is usually the first rose to bloom in my garden, sending out multiple buds in February, and when they are open on the cool spring mornings, the fragrance is unbelievable. Soft and powdery at first, yet rich with complex spicy notes. Some roses just give away their beauty at first glance, but in every sense this rose has layers of beauty and sensuality.

I spent the late afternoon with my nose stuck in in one of its thick blooms. Like all intoxicating fragrances, it brings up memories. The first is my grandmother’s hand lotion. This is the scent that I think of when I think of rose fragrance.

When I started building a “dream rose” list for my soon-to-be landscaped backyard, Souvenir de la Malmaison was on the top. Picture after picture of its luscious pale pink flowers and descriptions of its fragrance gave me a kind of abstract standard against which I held all other roses. But little did I know that I already had this gorgeous beauty, right in the front of my house! It was one of three very well-established rose bushes that came with our house, and they are, I suspect, as old as its original inhabitants. (A china rose in our backyard is ready to climb up our garage and seems to bloom in near shade; I have not identified it yet. The third rose struggled in complete shade and sadly breathed its last in the autumn of 2008.)

It took me a few years to identify it properly, mostly because at first I knew nothing about roses. But anyone who has sat on our porch in spring has known this rose. In spring its fragrance wafts down the driveway and lures people in.

Souvenir de la Malmaison (often shortened by rose lovers to “SdlM”) is a bourbon rose, released in 1843 by French breeder Jean Béluze. Named after Malmaison, the rose garden of Empress Josephine, SdlM has been historically adored as “The Queen of Beauty and Fragrance”.

The bourbon roses are worth growing in Texas, and many of them, including SdlM, are tender in colder growing zones. Here in Austin, my lovely rose stays green nearly year-round and puts on its biggest show in spring, but has intermittent blooms throughout the year. Some people complain that it tends to “ball” in humid weather, which means the buds won’t open. It has happened to me but not enough to worry. The problem can be solved by peeling back the outer petals of a bud. 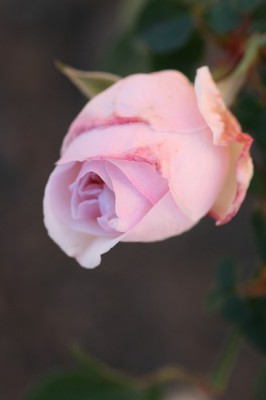 She also usually gets powdery mildew in spring, and at least once a year loses a cane, but for the conditions she is in, this rose is pretty tough–growing in almost total clay in a clump of St. Augustine grass. The bush reaches about four or five feet at most, but by mid-summer often sends some canes out laterally, probably in search of light. During the summer this part of my house gets shade for half the day. I rarely fertilize the bush, and even in my lack of knowledge hacked it back pretty severely the first year we lived here. But I’d say, for a rose that is at least 15 years old, possibly many more, that grew and bloomed through neglect, she is quite majestic. As all the pictures promised.

On a side note, I adore pale pinks and especially quartered blooms in roses. This is a really fat, full look in rose blooms, and happens when there are so many petals that they tuck into each other in a radial pattern that seems to divide the bloom into four parts. When these kinds of flowers open, they often look flat, rather than cupped. Here are some examples:

One of the drawbacks to these huge-petaled roses is that they are prone to “balling” in our climate. Roses ball when humidity is high or the weather is wet, and in buds with sometimes hundreds of petals will stick together. Imagine wearing hundreds of layers on a hot, humid day–the petals more or less “sweat”. The result of all this is that the outside of the wet bud ends up frying or browning, and the insides start to mildew and rot from the inside out.

this comical creature is a rotted SdlM bloom

Souvenir de la Malmaison is particularly prone to this, and so is Clotilde Soupert. I lost hundreds of buds this year (2009) to balling. One way of solving the problem is to get to the bud before it’s too late and peel off some of the outer layers. (If the bud stays closed for several days once it’s fully formed, you know it’s balling.) I’ve had mixed success with this, mostly because I get to the buds too late. In doing this, yes, you lose some petals but the blooms are so thick anyway that you might not notice.