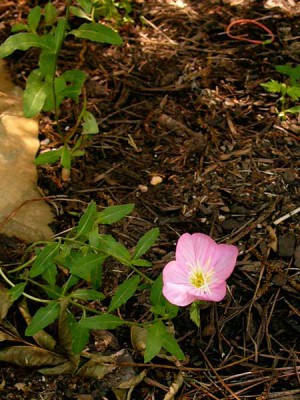 May 3, 2007. These lovely little pink flowers are quickly becoming my favorite of the Texas wildflowers. I’m partial to simple cupped flowers–winecups or California poppies–and like they way they just drape in the wind. These primroses first started appearing in early April on roadsides and margins of gardens. They blanket whole areas and seem to make for a good groundcover. Some seem taller than others, some grow in full sun, others under the slight shade of a tree, but for such delicate flowers they appear to be sturdy. It has been said that these are the favorite of Lady Bird Johnson, and it’s no wonder. They are wild but elegant.

I spread a packet of these seeds in my ‘wildflower yard’ experiment last fall (2006), and wasn’t sure if they had germinated or not, until I bought a group of potted primroses in spring, and realized that the same foliage and leaves were also growing and dotting up in different places. I hope they reseed and keep showing themselves.

March 7, 2009. The pink primroses are back! I’ve noticed them along the sides of the road–and it seems that this year many of the wildflowers are early. We haven’t had much rain, but the early heat has sped things up. In my own garden, the primroses have reseeded themselves along a fence-line, and despite digging that area up last fall and mulching it heavily in order to plant some summer grasses, they still reappeared this year and in greater numbers.

I love how they tend to start blanketing the area where they grow, and to some neater gardens, primroses may be a bit unwieldy, but like most wildflowers are a welcome sight in spring. Their leaves usually start reappearing in late January, and both their flowers and foliage often disappear by June, so I can’t depend on them for year-round look. Like most perennials, in their second and third years each plant is much larger, the flowers bigger.