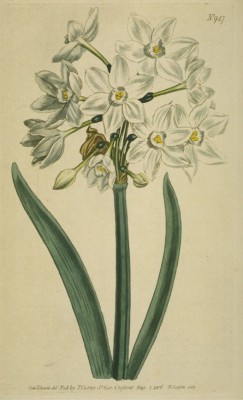 Paperwhites are native to many parts of the Mediterranean. and are a type of narcissus closely related to the Tazettas, many of which are great for the South (Grand Primo, Chinese Sacred Lily, Erlicheer, and Avalanche are some that I grow). Like Tazettas, paperwhites bloom in little clusters of small white flowers, sometimes with yellowish cups but most of the time are all white. Most people grow Paperwhites indoors (you see a lot of them in stores around the holidays along with amaryllis) on rocks or in potting soil, let them bloom and throw them away.

If you’re zone 8 or warmer, it’s possible to grow them outdoors, although I’m not sure how many people try this. The Paperwhite bulbs you see in all the stores are usually bulked up in their growing process so that they are able to bloom heavily the first time around. I can’t say I know much about this, but I thought, what the heck, I may as well try them outside and if they bloom, great, and if they don’t come back next year, no big deal.

Indeed, the flowers came up outdoors and bloomed all winter long, and I planted them at different periods so that I could have them from around Christmas all the way through March. The main thing to keep in mind with narcissus is that like many bulbs, they may rot during the summer in heavy soils.  There are a few Tazettas that don’t and it’s worth reading up to find out which ones do well in most of the southern clay soils.

And in my opinion, the musky fragrance of paperwhites is better outdoors than indoors which can fill a room with a faint sulfur odor, but outdoors, you only smell the top notes, and they are most welcome in the middle of winter (along with my Sweet Olive tree, which is fragrant nearly all winter long).

Another issue with paperwhites, either indoors or outdoors, is their lanky growth. I’ve found very little solution to this. If it’s anywhere above 70 degrees (as it often is both indoors and outdoors in Texas), they shoot up quickly on nearly 2 1/4 feet stalks and flop over as soon as they start blooming. (And you can see from my picture of some indoor paperwhites that this is not exactly a neat flower.)

The paperwhites I’ve tried are: Gaililee, which has an extremely strong fragrance and is a little too tall for me, Inball, whose flowers are slightly bigger than Galilee, on slightly shorter stems, and Nir, which is my favorite so far–very crisp and larger white flowers, slightly less over-powering fragrance.)]