There are different types of Oregano, of which the common names can be confusing. A couple different types are called Italian Oregano, or alternately Marjoram. By far, the kind you most often find in your spice jar and the species most often used in Mediterranean cooking is Origanum vulgare, also called Greek Oregano or Wild Marjoram.

Greek Oregano is said to be a little spicier than the kind I am growing, Origanum onites, which the tag called Italian Oregano and which is also commonly called Pot Marjoram. There is also the actual species Marjoram, Origanum majorana. And not to mention an herb known around here as Mexican Oregano, which is not really Oregano at all, but a similarly spiced herb from the verbena family.

In any case Oregano and its sisters are just one of those herbs that make any dish oomph, and are a staple in the Herbes de Provence. (I still have a little satchel of stale-but-once-fresh herbs I bought from a roadside farmer in Provence–for romance’s sake, I guess.)

Names aside, I wouldn’t know the difference. My oregano tastes like oregano, is great in cooking and grows like crazy here, eventually forming a small spreading evergreen shrub. I plant most of my herbs, with a few exceptions, in fall and this includes all the perennials. Oregano grows slowly through the winter but in early spring begins to put out new tender shoots, and those are said to be the best for cutting, especially before the plant flowers.

Over the summer the plant still grows, sending out long woody stems, eventually reaching about 2-feet high. Even in early November, I was cutting woody stems of oregano and it still tasted fine so I’m not so picky about keeping it from getting woody.

For some reason I kept thinking my plant was thyme, probably because I had neglected my herb bed for a year for other projects, and never cut anything. From one small 4-inch pot, however, the “thyme” had grown to a 2 feet by 2 feet little shrub and I wondered if I could make some baby plants from it. So I dug it up, and voila–the tag was still buried in the center of the plant. Duh, it’s oregano, silly! (Apropos, since my husband always jokes that I leave the tags on clothing all the time like Minnie Pearl’s hats. I just get so excited to wear things that I forget to take the tags off!)

Anyhow, oregano makes my herb “experiment bed” look lots better even when everything else is scraggly. So it has ornamental value in my garden. My particular variety is said to be hardy to zone 8a, which is close to mine so I’m not sure it can be grown as a perennial in colder climates. Perhaps the Greek kind is better for others?

Here’s how I divided it:

After pulling the whole clump out, it’s really easy to see spots where it naturally separates. One little clump just fell off on its own, which you can see on the left:

I took the rest and just pulled it apart into two:

As you can see, this thing is happy to spread. Even stems that touch the dirt start rooting: 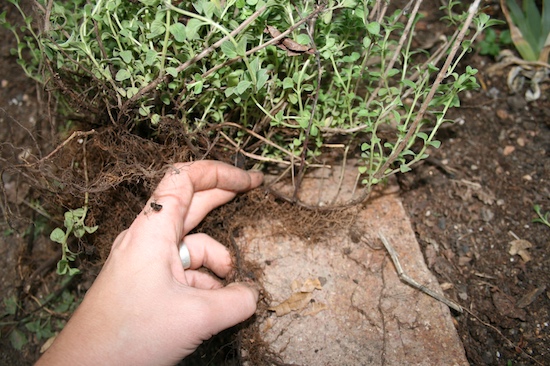 Here’s the 3 new clumps, before and after cutting them down to about 6 inches. It sends out fresh tender stems pretty quickly so trimming it down before its next growing season gives the plant a fresh start.

I have a feeling two years from now I’ll be giving away some oregano.

Like most of the other herbs I’ve got going on, oregano likes a fluffy soil on the dry side but seems to handle any conditions. In our torrential rains of 2007, the rosemary and lavender and croaked, but the oregano seemed quite happy. In a drought it was happy too. How can you lose?