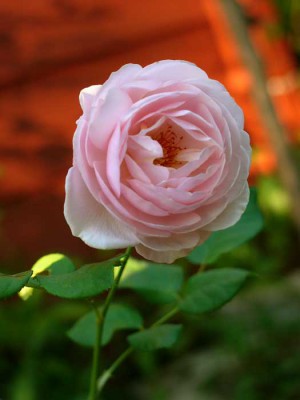 I am slowly building a rose bed that stretches across the side of our house. It was covered in Lantana, which is cute but smells funny when you cut it and just looks straggly in the middle of summer.

Right next to each other I have my relationships. A French rose, an English rose, and an American rose. They all look like their origins and have much to say about them. I won’t draw the metaphor out too much but I absolutely love this rose. It’s a David Austin rose, which means in rose lexicon “English rose”. It also means hardy rose, rose that is capable of much fragrance and tough circumstances like many antique roses.

I do think my English friends are that way. They are grounded in older things, have toughed out more; most friends my age had parents who lived through rations. And yet they stay so cheery, and rarely complain. There’s a certain propriety, which at times they sometimes mock themselves for, but I think it’s beautiful. Just like this rose–it’s a not-quite-peach not-quite-pink shell pink and just a perfect form, each petal lined up so neatly. There’s a primness yet a great big rosiness about it.

It’s also the tallest of the 3 and the most upright (I will get to my thoughts on the crazy sprawling ever-blooming American rose and the finicky but absolutely decadent French rose later). And the smell–like light cinnamon and spice. Not to say it is the only representative but I chose them to be. I’m already planning space for one or two more of this particular bush.

All my roses are still small so I can’t report on their regularity but so far I have to make this one my favorite because I love to just sit and stare at it. Doesn’t that make it all worthwhile?

As my English friends always say, “you’re just gorgeous!” Meaning, in every way.