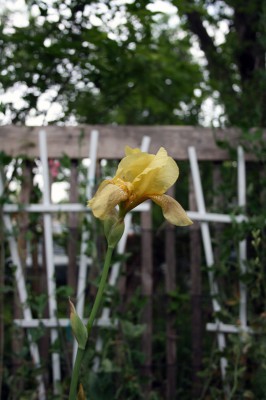 I hesitate to call this iris heirloom, or suggest its name, but that is the closest I have come so far to figuring out who might be this beautiful iris.

When we first bought our house, the front and backyard surprised us in each season with all kinds of bulbs–old jonquils, rain lilies, oxblood lilies, oxalis and a lone Dutch iris oddly placed in the very abandoned part of the back yard.

The more I paid attention to other old neighborhoods in Austin, I noticed all these same flowers in other yards, helping me to understand that they were not only loved by another generation but seriously thrived despite neglect. Both my jonquils and irises have spread around and beyond the fenceline between our property and our neighbors’, suggesting that they are at least old enough to have been planted at a time when the two properties were one. The other thing that gives away this iris’ age is the fact that there were nearly a hundred of them growing–or spreading–under heavy thickets of old Chinaberries and pecans–in places that have been in total shade for at least 15 years, if not more.

My picture is a bit sad-looking but I couldn’t get to it before it lost its shape. These irises stay evergreen year-round, which is nice even if they don’t bloom. The tall sharp-looking fans add some structure to an otherwise wispy winter garden. Never having seen them bloom except across the fence in our neighbor’s yard, I divided a bunch in Fall 2007 and placed some in a fresh garden bed with better soil and sunlight. And now I’m being rewarded with one lovely bloom (April 2008). The stalk has 3 buds on it. I’m not sure why the others don’t have bloom stalks yet, but I can see from my neighbor’s yard, his are not yet blooming. It could also be that they take their time to bloom after being divided.

A local Austin blogger has a very similar if not the exact same heirloom iris growing in her yard. I had already found a picture of ‘Alta California’ on an heirloom iris website, thinking this was the closest to mine, and on her blog someone suggested the same. So for now, I’m going with that name.