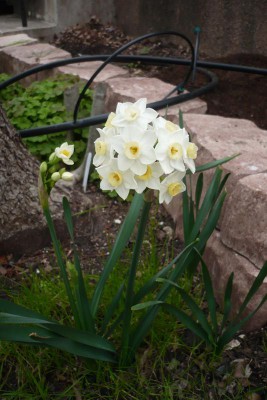 This lovely fragrant daffodil is a frequent site in old yards around Austin. When we first bought our house, these flowers surprised me by popping up in February in the oddest places around our house–nestled against our fence, along the driveway, places that have long been forgotten as potential ‘planting zones’.

Grand Primo is an old hybrid from the Narcissus tazetta species. (And calling it a daffodil might be confusing to some, who think of the smaller jonquils and tazettas as something different than the big-flowered, big-cupped modern types most often known as daffodils, but I call all the Narcissus daffodils–that’s just where I come from!)

I had nearly forgotten what daffodils were, they seemed from another time, or maybe they just weren’t as popular in the Midwest as they are here. The first time they bloomed here, these unselfconscious little beauties brought back old-fashioned memories (we called them ‘buttercups’). I later found out that this particular kind was rare to come by in stores, and only now being rescued and divided by a few sellers who have hunted them down in historic neighborhoods in Texas and are propagating them. Perhaps the best way to get them is through friends because there are plenty around here.

Now that I know what they are, I’ve dug some up and carefully placed them around areas of my garden where I want more. They naturalize well (meaning, they multiply and rebloom every year), and don’t mind the heavy clay.

Out of curiosity and wanting to find more out about the several bulbs that I had growing in my garden from old times past, including Oxblood lilies, seemingly wild onions, and old irises, I finally broke down and bought the bulb book that it seems most southern gardeners can’t live without, Garden Bulbs for the South by Scott Ogden.

It’s not the easiest book to read, partly because of its somewhat conscious writerly language, which at times gets in the way of the book’s organization. But undoubtedly there’s nowhere else to find this information about what bulbs have been tried and tested–and lasted–in the south.

Anyway, it was in this book that I read some of the history of ‘Grand Primo’ and discovered more daffodils I can plant here, and hope to leave behind after I and many parts of my garden are gone.