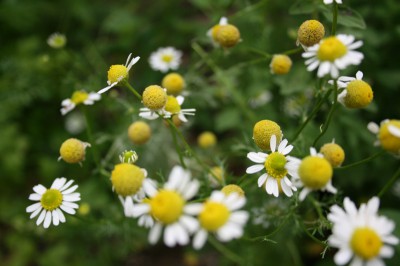 There are two kinds of chamomile grown for tea, one commonly called Roman or English chamomile (Chamaemelum nobile). There are gardeners in some parts of the world that carefully cultivate this kind into an oh-so-romantic-sounding “Chamomile lawn”. Imagine walking and playing on a carpet of fragrant daisies.

I could write a whole post about rethinking lawn in a romantic sense, but that would be getting way off track here. I am not growing Roman chamomile but “German” chamomile, Matricaria recutita. The two are similar species, although German chamomile is annual while the former is perennial, and used for similar purposes. While I struggle to have a lawn of any sort, I do admire ordinary white and yellow daisies, and have been on a quest for all things daisy-looking, from Feverfew to Ox-eye daisies to Shasta daisies, all of whom occupy that large Chrysanthemum family of asters and daisies.

I am growing all of them from seed right now. Last summer, my Feverfew bit the dust in our garden makeover, but I had “daisies” for a few, short glorious weeks in spring when the chamomile looked miraculous in our herb bed. German Chamomile is incredibly easy to start from seed, germinating in less than a week in moist soil. I started a group in seed flats in late September, and by late October they were large seedlings and established fairly quickly in good garden soil. Like most hardy spring or early summer annuals, it is probably best to plant Chamomile by December if you want to see it blooming in spring.

By June they were looking awfully scraggly, as was most of my drought-stressed garden, and starting to get overshadowed by an overgrown oregano plant and cilantro going to seed, so I’m wondering if I hadn’t discarded them, or perhaps would have deadheaded them early on, if they would have had longer success here. I’m guessing that they are a spring annual here, which is so short for such a pretty flower and one which I’d love to grow year-round for tea. I guess I have to learn to dry them. (I have the same sorrows for cilantro/coriander, as I buy this herb nearly every week for cooking, and wish I could have it year-round.)

Chamomile has so many wonderful properties. Both the flowers and the leaves are mildly aromatic, a light apple scent, and can be dried for tea. I have purchased dried chamomile as well for making a mild “tea” to water seedlings with, in order to keep fungus gnats at bay. But admittedly, I grew them for their flowers more than anything else. Despite their short life, as I had hoped, these were like cheerful little lights spreading out across my herb bed. I am someone who likes having to get close to things to really appreciate them, as I did with my camera. And I plant my garden this way, too. There are some plants that have obvious impact from a distance, but I like to think that much of my garden requires patient micro-vision of the small and unpronounced.