I sowed these in early fall of 2007, during a Dianthus craze. I was buying just about any Dianthus seeds I could get my hands on, and during a trip to London I bought a packet of these and one of ‘Ipswich pinks’ from the gift store at Kew Botanical Gardens. China pinks are hybrids of Dianthus chinensis and are very popular as winter bedding annuals in Austin; they can flower from October to sometimes as late as July. In some cases they even struggle through the summer to start blooming all over again in fall.

I have had some China pinks blooming for two years straight, even through summer. Although they are listed as annuals, I would suggest they behave more like a short-lived perennial, and I am even wondering if, by dividing them every so often, I could keep them going even longer. They are a true year-round flower here, and I don’t know why I don’t see more varieties around.

I assumed that my packet of “Victoriana” seeds might grow to look like the kinds I see in the nurseries every year, small cutesy bright red single flowers barely over 10 inches tall. But these are quite different; their taller stems bear larger, sometimes double, deeply fringed blooms in regal jewel tones. They look more like small carnations and make for very pretty bouquets. From a September sowing, I had flowers by Christmas. Needless to say, I will grow this again, and highly recommend them to Texas gardeners looking for another kind of dianthus. Just be sure and get them started in the fall, rather than spring, so they have a chance to show off in winter and get established. 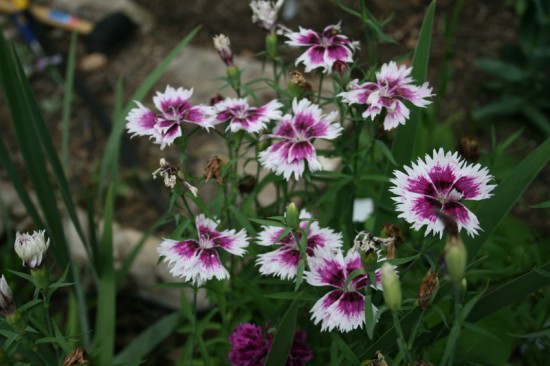 Just one seedling can grow in over a year to make a neat, bushy plant about 2 feet wide and they are lovely if given room to spread. I just love dianthus; they have a way of looking wildflowery and formal at the same time. Unfortunately, many of the China pinks them have almost no scent, including “Victoriana”.

Other varieties worth trying from seed or plants include “Edwardiana”, a related variety, which I can’t wait to try next, and the Elegance series, both of which are available from Thompson and Morgan, an English seed site. I’ve also purchased perennial dianthus seeds from Allwoods in England, one of the oldest dianthus breeders still going. I’ve looked around for seeds in the U.S. but English gardeners just have a lot more choice in pinks. Perhaps they fell out of fashion here at some point.

Although they have survived full sun in my garden, they do struggle if planted late in the spring, and are best with some shade in the afternoon. Most dianthus do well in limey soils, which we have naturally in Austin, and decent drainage.