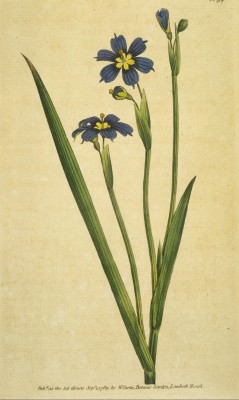 I bought a few pots of this “grass” from a small local nursery, and within a week started seeing it everywhere… including the Wildflower Center, where its baby iris-like flowers unassumingly dot the edges of the center’s landscape. From a distance it looks like buffalograss, but up close is a little elegant world.

I looked it up but discovered there are many varieties of it that are native to the U.S. The plants I bought aren’t as scratchy looking as the Wildflower Center’s, but more of a bluish-green grass.

Update January 9, 2008: I just finished sowing these as seeds outdoors. I like these plants although they don’t have a long bloom season. They look very pretty at the edge of some of my garden beds, so I figured I tried to sow some both in pots and directly in the ground.

Update November 2008: I never saw the seeds germinate, and it was probably wishful thinking to direct sow them. They might be better subjects for indoor sowing under more controlled conditions. The Blue-eyed grass that I planted in spring of 2007 returned in 2008 and in much fuller appearance. They are the most darling plants and have to be appreciated up close. From a distance they look like little grasses but the flowers are such a beautiful luminous blue.

I am pretty sure that the kind I planted are Sisyrinchium bellum, a flower native to the West Coast, but there are 19 other very similar-looking native species, including Sisyrinchium augustifolum, native to Texas, and Sisyrinchium langloisii (native to Oklahoma, Arkansas and Texas.

In any case, the spot where they returned is a fairly undisturbed area at the edge of one of my beds, rarely watered and mostly unamended clay soil. Since last seeing them I have lined the side of my beds with large gravel so I’m suspecting they’ve gotten too buried to return.

Blue-eyed grass is in the iris family, and most of the native ones were from the prairie and plains; it has a fairly short bloom span and even its leaves disappear about a month after blooming, so it’s nothing to count on for long-term effect, but sure is pretty in the right spot.