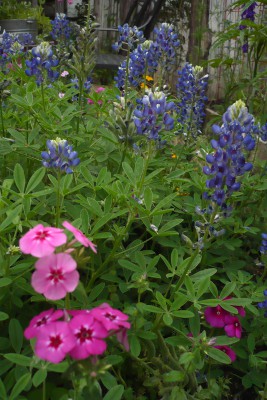 The state flower of Texas, and the glory of the spring. No roadside or edge of a ranch, or even small garden like mine feels complete without them. Bluebonnets are diminutive lupines, but look stunning in mass. While they’re the essence of meadow in Texas, they’re also very pretty in carefully arranged garden beds.

Bluebonnets are sown in fall, and occasionally you can find them as nursery-grown annuals, but the seed is so widely available and easy to sow, that it’s worth it to always try some every year.

While the peak of bluebonnet season is in April, they occasionally start blooming in early February (sometimes you can even spot one in January or December), and continue to bloom all the way to June if it stays cool enough. To get them blooming earlier, many people sow the seeds in late summer, or even let their bluebonnets self-sow. They naturally drop most of their seeds in June. To keep them blooming later, you can sow another group in October or November.

There are five other species of Lupinus called “Bluebonnets” in Texas, and for a long time this created some controversy about which exactly was the state wildflower. The original state wildflower, designated in 1901, was Lupinus subcarnosus. Soon after, it was discovered that there were other species far more common than this one, and particularly Lupinus texensis (widely found in Central Texas) was considered the most beautiful. Finally, in 1971, the governor of Texas signed a bill that included all five species of Bluebonnet (and any others yet to be discovered) as the official state wildflower.

It might seem a rather humble flower, and California has lupines that look almost exactly like bluebonnets and rival their beauty, but there is something special about seeing massive drifts of them across fields, or discovering a lone flower hiding in a corner under junipers in the hill country, and the fact that they are only native to Texas. 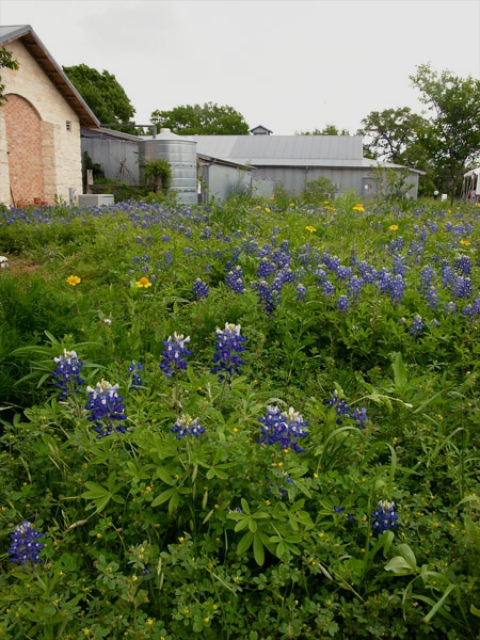 There are pink variations of bluebonnets, too, but I’m just not interested in these. I love all the deep blues of lupines; and the Bluebonnet color looks gorgeous contrasted with the native color of the California state flower, the golden orange-yellow California poppy (Eschscholzia californica).

I’ve also written about how to grow bluebonnets.