What lived, what died 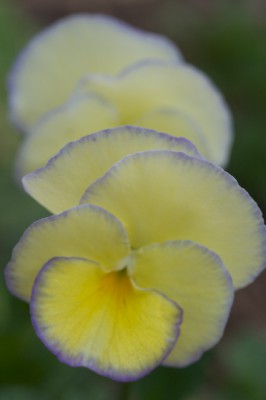 It might be too soon to say this, it being just early August and we have two more months of hot (i.e., 90s-100s) to go, but I am already able to see what of my new plants and garden are worth trying again, what needs to be moved, and what I would never plant again.

Viola ‘Etain’, a perennial viola in some climates, died during our three-week stay in Europe. Partially because a friend accidentally turned off the drip system in this area, but I have a feeling it would have needed daily watering anyway. I loved how much these bloomed in spring and even through the early days of June, but they do need water. I think I will pass on these again (although they have a beautiful fragrance, if you can find them!).

My two Philippine Violet plants, planted last October, were looking great in early summer but have sadly passed on. These aren’t violets but look like bushy ruellias, and were recommended to me by the Natural Gardener as a good shade plant. One died by the time we got back from Europe, and the other kept wilting despite me watering it every day for a week. I love these plants and they are great for a shadier or understory garden, and I do see them around Austin. I suspected they died from some kind of root rot. Cotton root rot, or Texas root rot, as it is known in other states, can kill many plants, and is especially active in high pH soils (check) and temperatures above 90 (check). I would worry about trying these plants again if my garden is somehow susceptible to this rot.

Moving out of the Definite Goners category into the Curiously Misbehaving, we have here, as exhibit A: 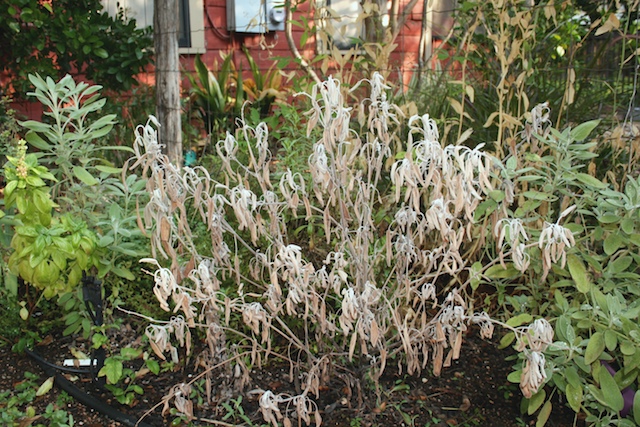 I planted this culinary sage variety last fall and am hoping to have a big bed of them–they are so pretty and fuzzy like lamb’s ears and of course great for cooking. One of these four plants in this bed seems to be drowning and dying. The others are fine. I suspect this is a case of too much watering. I will have to dig under the roots and inspect. I had an idea in early summer to remove the other herbs from this bed (oregano, Mexican mint marigold and thyme), and have an entire bed of this salvia–it is that pretty. I tend to only plant in twos or threes, but from a distance sometimes my garden just looks so mish-mashy. I have a lot to learn from broad-strokes kind of gardeners. Anyhow, if it is too much water as I suspect (I had a lavender die in this bed two years ago), I may till it up and add some more of that super-duper expanded shale, a few bags of which I still have around. 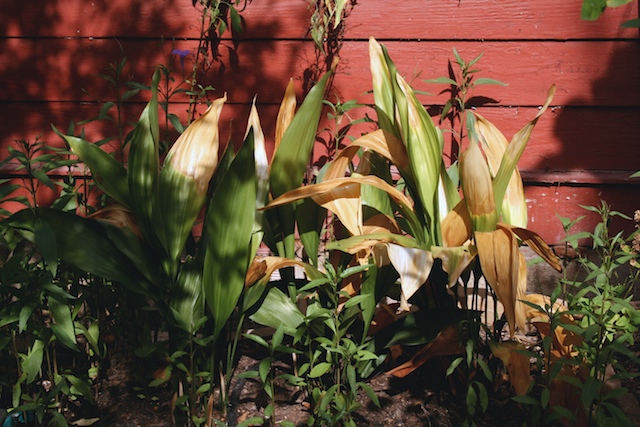 I thought these were a no-brainer in a southern garden, but boy, the Cast Iron Plant sure looks natty. I think this is due to too little water, but still–not exactly cast iron tough.

Lamb’s Ears were another try–on some days as if they’ve had too little water. On others they appear to be drowning. I suspect this might just be a late-summer appearance. Lamb’s Ears often split open after flowering, creating a kind of rotted look in the middle. These, however, have not yet flowered this summer. I may just remove the rotted parts and see how they manage the rest of the summer. 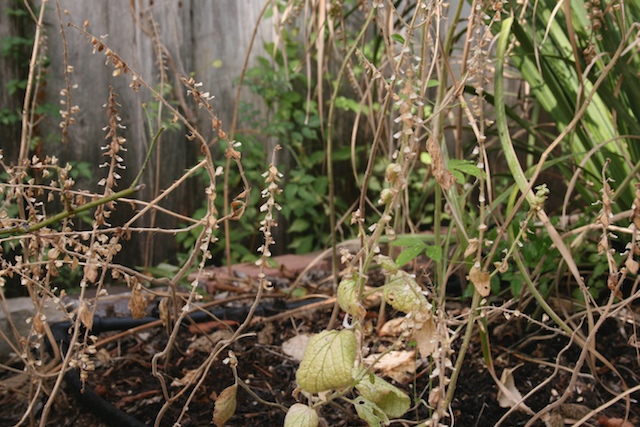 I do love the Heart-leaf Skullcap, especially in spring. It reseeds like mad and really fills out an area with its fuzzy leaves and lovely salvia-like purple blooms. However, within one month the entire plant starts to die back, regardless of water use, and look very straggly. I have read that Heart-leaf skullcap often returns in fall but I’ve yet to see this happen in my garden after three years. I’m considering tearing it out this fall and planting Salvia guaranitica (“Black and Blue salvia”) in its place. This salvia looks just gorgeous in fall in much of Austin.

Other ho-hums and danger alerts:

I’d put this in the curiously misbehaving category but I know that Princess Flower (Tibouchina urvilleana) is in its first year and am learning it just needs more water than I thought. Of the three plants I bought, one has died from drought, and the two are holding on with brown tips at their leaves. I think these would appreciate morning sun only. I am on the edge of their hardiness zone, and they could possibly die over winter. But oh, how beautiful they are when in full growth (here and here)!

This Bicolor iris (Dietes bicolor) looks great in partial shade, and terrible in full sun. Unfortunately all those lovely spring blooms I see from these plants all over Austin are usually from the ones in sunshine. In the shade I might get lucky to have one or two. But by mid-summer they looks as if they’re dying in summer. So I guess one has to make a choice about which is the lesser of two terribles. Personally, I like this foliage in the shade–it looks like a tall very blade-y grass–and how it makes for a good understory or foundation planting.

After three years of watching them in my garden, daylilies seem to be fussier than I thought. While pretty in the spring, the foliage is rather spent-looking by now. Some even die back completely. Most of these are Stella d’Oro daylilies, and they just ain’t all that. I’m sure there are better daylilies out there, but this seems to be all the nurseries sell. Must’ve been a marketing thing. In this mass are also several heirloom daylilies that are as old as my house. They bloomed for the first time this year, on nearly 3 1/2 feet tall stalks, which tells me I may need to move them behind something. Note to self: daylilies will often skip a year before blooming after being replanted, just as I’ve discovered with irises. One must be patient with many bulbs.

Pleasant surprises and other good happenings in the garden:

My foundation planting of three Oak-leaf hydrangeas seems to be doing well. These are “Alice”, a tall oak-leaf cultivar. I imagine it takes a couple years to reach the height and fullness I am looking for and these were planted 10 months ago, and are growing at a medium-slow rate. However, four other plants have died in this same place including a beautiful Japanese aralia (Fatsia japonica) which seemed to die from rot. It is the same area in which the Philippine violets died from root rot, so I’m guessing I need to plant things known to be immune from now on, but thankfully the hydrangeas seem to be surviving it.

Hydrangeas, I was guessing, are a real risk here. I tried a pom-pom “Encore” hygrandea in here two summers ago and it lived until July at which point it declined beyond repair in the heat. An azalea suffered the same problem. (One has to be dedicated to keeping the soil acidic on these, which I am not.) I am hoping the oak-leaf hygrandea, which is a U.S. native, and seems to live successfully in southern climates, sticks around.

Acidic-need plants just stink in my garden. The last one I am trying is a Gardenia jasminoides in a pot. I was careful to give it a homemade, high-draining potting mix, and in the spring it bloomed beautifully (oh, that jasmine fragrance!), but started to look a bit ratty in early summer. While we were away a friend tended it for almost a month and it came back to me looking lush and green at the end of July! She has a love-touch with plants so I know that is half of the success, but also containers with rainwater and yes, gives them Miracle Gro. I am realizing, slowly, that I don’t fertilize or water pots enough. Containers have different needs, and I think that fertilizers drain more quickly in containers than in-ground plants. Containers don’t cultivate worms, don’t cultivate the same microbe conditions–they just need something extra. So I now use a combination of slow-release and liquid chemical fertilizer in my pots, with a splash of Superthrive in the watering. I’m sure this helps cultivate more acidic conditions, in addition to a constant supply of available nutrients that they weren’t getting when I was just using a very light fish-based organic fertilizer.

Do I need to say that I lost more grass this year? I wish I would have composted the lawn this spring, I think it would have helped, but I lost a huge 4-foot spot due to sun and heat. I don’t have a huge lawn, just a teensy weensy slice of it, but I do like having that green, no matter how unfashionable or thirsty it is.