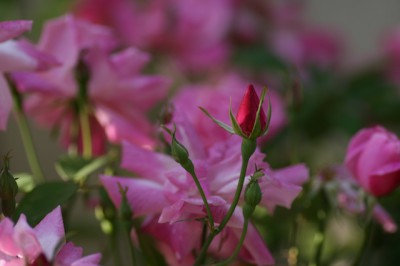 I really wish I kept a more regular garden diary–at least for myself. (I have for some reason a backlog of entries I’ve never published so I’ll try and get those on here soon.) This spring has been particularly miraculous around here; so much of the hard work of the past couple of years combined with the coolest spring I’ve ever experienced in Texas produced an over-abundant garden so lush with fragrance I’m quite happy to just be in my own garden. Never mind that the weeds are on steroids, too. I’ve barely had time for garden tours, especially my favorite at the Wildflower Center.

I’m sure this year was one of the most glorious they’ve experienced–after the intense drought of 20 months we had loads of fall rain (good for getting new plants established and all the wildflower seeds germinating) and then so far a pretty rainy spring. Today it’s 70, and it’s late April. Last year it was in the mid-90s by now and all the sweet peas had croaked.

Not that things were without worry. Several hard freezes–which are unusual if totally absent here–killed back a lot of plants that are usually green through the winter. I thought I’d lost the New Zealand flax, but now new leaves have sprouted up. Same with the oleanders. All those on-the-cusp tropical plants didn’t fare well, and I’m sure were completely lost in gardens outside the city. While driving by one of the local garden centers this week, I noticed my favorite hedge of oleanders had been torn out and cleaned up.

I also worried about the sweet peas–by far my favorite spring plant. Half of the seedlings died in the first freeze and the other half looked as if they were about to follow in another surprise freeze in late February. I mean, we had snow! And usually the early-blooming sweet peas start around February. Better late than however, and those that remained went on to grow like weeds this past month.

Normally the later-blooming sweet peas don’t have a chance here–the best bets are buying either Painted Lady (an antique early-bloomer) or winter-blooming kinds. But for the first time I have an abundance of Cupani and Matucana (similar to the original wild sweet pea) growing right next to April in Paris–which I’ve tried unsuccessfully to grow for three years. It usually succumbs to heat and mildew before it gets a chance to bloom. (Sweet peas seem to develop lots of blind shoots above 90 degrees.)

Anyway, these three are by far the most fragrant of all the sweet peas and just a little vase of them makes a whole room sweet.