This is my first year trying starting seeds indoors. Inspired by the gardeners.com website which has these special systems that make things look easy, I ordered a few of their seedstarting trays and some soil and from another site California poppy seeds. 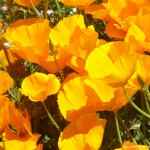 During a trip last year to the Natural Gardener in Austin, I kept noticing these silky orange blooms everywhere. I had to have one! I went back a second time and stole a bloom off of one of them… to ask at the counter. A girl asked a man–who turned out to be the owner!–and he said cheerfully, ‘oh, California poppies!’ This made me like them even more. I showed a picture to my husband who said he loved them too, and saw them everywhere in California when he used to live in S.F. Now I HAD to have some.

And they promptly fell over and died.

Well, I’m still learning to restrain myself from wanting things NOW in the garden.

So, this year, I still started kind of late, like mid-February… next year I’ll start in January. But I discovered the best way to time things is to make a calendar, and count off backwards how many weeks it takes for the plants to germinate, then grow into a healthy, transplantable size.

You see, plants have to get big enough. And many have special times they like to be planted in the garden. For instance, here you can plant a lot after the middle of March. But you might be in trouble if you plant anything really small and tender before then. So I discovered March 8 is the average last frost.

(Update May 2007: now I’ve discovered that many seeds can be started in fall when soil is still warm and the seedlings will grow a bit and survive most of the winter–in fact, many flowers which only bloom in spring NEED to be started in fall and transplanted in fall so that they will bloom at the first sign of early spring weather. Oriental poppies are one of those. I didn’t plant anything between November and January, but next year I will.)

I wanted apricot foxgloves. They take, according to what I found, 12 weeks to get big enough to plant. That’s 2 1/2 months. So count backwards 12 weeks from March 8 and you get somewhere at the end of December you can start them indoors.

The next thing I figured out is that plants need light. So this year I started my seeds but then they got all long and desperate looking. They call this “leggy”. This means, give me light. So I rushed out to home depot, bought a shop light with flourescent bulbs and set up a weird system that still doesn’t give enough light but hey, at least my plants are growing.

So, what did I start on my first try?

Well, because last year I went crazy buying seeds (which I thought I could just throw out and watch grow), I had a bunch left. So I tried some of them in seedstarting trays.

Cosmos. I planted 2 trays of these. They look okay but definitely “leggy” right now.

Zinnias. These are recommended as the “seeds for dummies,” they like to grow so much, and they are doing great, but yes, a little leggy.

Oriental poppies. Ok, I am obsessed with poppies. I hear these don’t do well here, but I love them!!! They have just germinated after 2 weeks, and are now getting a second set of leaves.

Gayfeather. Now these are the hardest. I got adventurous and tried this thing they call “stratifying”, which in this case meant putting them in a moist paper towel and refridgerating them for a few weeks. Many wildflower seeds need the cold to crack their coats. I put them in a tray and after 2 weeks a few germinated but then promptly died. Oh well for that one. I love gayfeathers. They always end up in bouquets as a kind of side-decoration but I think they’re cool all on their own. (The illustration at the top of the home page is a gayfeather.) I hope I get to see them in my garden some day.

So far it seems like the zinnias have the best shot at making it into the garden, and if that’s all that makes it I’m fine with that. I do hope the best for the foxgloves. And the poppies? Well, if they make it I’ll be happy, if they don’t I’m starting earlier next year with better lighting. I’m determined!

One more thing I learned with seedstarting. Fertilize after they get more than the 2 little sprouty leaves that first come up. For some this happens a few days later, for others weeks. But I got a little seedling fertilizer to put in their water tanks every week or so. Stay tuned to how the seed experiment continues.