I’m new to the world of bulbs. But enticed as usual by beautiful pictures in catalogs and memories of certain flowers from childhood, I’ve thrown research to the wind and bought bulbs of many kinds. In fact, probably too much bulb buying. I bought a bunch of cannas before I knew how big they got, without having the space (or sunshine) to plant them. They are towering plants, sometimes 7 feet tall, and certainly not a plant I want to put around a border.

Such is the life of my experiments. Buying things without a vision of where to put them. I’m particularly drawn by all the ‘heirloom’ bulb sites. The idea of having old fashioned flowers that were grown 100, 200, 300 even 400 years ago in some mediterranean climate, is so romantic.

My house was built in the 1930s, and we were able to meet the daughter of the man who built the house for his family. Many flowers which surround our house (such as the huge line of oxblood lilies down the driveway and the crowded clump of daffodils near them) had been planted in the 40s and 50s. I love that my doorknobs are from the 40s, and that my flowers may be, too. So anything that says “old-fashioned” “heirloom” or “antique” already draws my attention. (And thank goodness there are few “vintage” flower sites, a word which in fashion design is quickly becoming meaningless. The “new vintage”–whatever!)

Anyhow, back to my topic. I’ve read enough around to know that bulbs can be cheeky in Texas. They may or may not come back, especially if they were made to grow in northern climates or at least the information about them is specific to more northerly places, as many Dutch bulbs are. But most of the heirloom sites I’ve found, whether they be in Connecticut or Michigan, seem attentive to the fact that gardeners in the South want to grow their flowers and so often have some advice for people way down here. 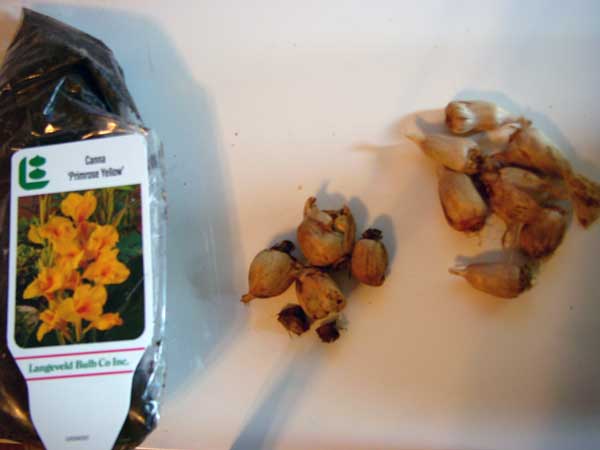 Take, for instance, hyacinths. That lovely sweet “grape juice” smell that wafts across your whole backyard when spring first awakens–that is a smell I remember from childhood. And a local store was selling these bulbs last fall. So I bought some. But I am still not sure what happens to them. Will they return, do I dig them up? If so when? I can’t seem to figure it out. Bulbs are a mystery, little things in the ground whose upstairs’ growth completely disappears from view for part of the year but have an entire life inside of them waiting to return.

But here are some basic things I learned doing bulb research, especially all those terms–and my own definitions (so they are far from authoritative, as I knew nothing about bulbs 8 months ago):

“Heirloom” bulbs, plants: means different things to different people, but usually seems to refer to plants that were introduced long ago but fell out of trade. Some are very rare. They may be 500 or 30 years old. Often refers to the variety of a plant or flower when it first appeared in trade but has since been hybridized, updated, or supplanted by new trends. Many heirloom companies are bringing back old-fashioned flowers that were in vogue in Victorian times, for example.

“Species”: species roses, species tulips, species gladiolus. What’s up with species? It seems like it means–original. The original, in-the-wild plant, before it was discovered by Europeans and hybridized into all manner of forms. Species seems also to be a catch-word for “hardy”–either hardy to cold, hardy to heat, hardy to lack of treatment because, after all, they existed naturally without fertilizers special soil or human intervention. And many species flowers looks so different from what we think they might look, sometimes more exotic and or more delicate than their descendants.

“Naturalizing”: basically means, a type of bulb that has adapted to its environment and learned how to take care of itself and multiply as if it was native to that landscape–with little care or intervention.

Fall-planted, spring-planted. Some bulbs are planted in fall, some in spring. Fall bulbs need cold and like cold to grow–and flower during winter and early spring months. Spring bulbs like heat and need heat to grow, and flower during summer and fall months. It’s good to do research on this, as just with other flowers, there are many types of each species and some flower earlier than others. So, for example, gladiolus are usually spring-planted bulbs, but some flower so early that some say it’s best to plant them in late fall or early winter. The only trouble with this is, many places don’t sell them in fall so you best get them from a Texas-based supplier.

Bulbs, corms, tubers, rhizomes. Just types of storage systems. You can get more technical than that, but I’ll just call them all bulbs.

Here are some bulbs I’ve planted in the last year:

Narcissus. I already have clumps of white daffodils growing in various parts front and back, which are surely as old as the house. I ordered bunches more of the from the Southern Bulb Company last fall. The two kinds I ordered are “Grand Primo” (Narcissus tazetta), with white blossoms, which are very close to if not the same as the old daffodils around the house, and “Campernelle” (Narcissus x odorus), a yellow narcissus which is often called a “jonquil”.

Hyacinth. I think I still have the bag I’m not sure where these are from, what country, what name. From pictures I researched they are Dutch Hyacinths, but there are lots of varieties and even heirloom kinds, which you can bet I’ll order in fall. They were so beautiful when they emerged in March, big purply grapey smelling blooms. They might be fussy but isn’t all gardening?

Gladiolus. Me and my search for tall spiky plants continues. In comes gladiolus, which are spiky, tall and just beautiful with many forms. I planted two kinds in April, both of which are known as “species” gladiolus: Gladiolus byzantinus. These are heirloom bulbs from 1629 with reddish magenta flowers, and I know from researching are known to naturalize in Texas. I interplanted them with Gladiolus calianthus, also called Abyssinian Gladiolus. These, too are heirloom, and first introduced circa 1896, and were originally from Ethiopia. My corms are just beginning to sprout and from the photos I’ve seen should have white flowers with maroon center. Abyssinian and Byzantine: just sound ancient, don’t they?

Tuberose. Polianthes tuberosa “The Pearl”. I found this at an heirloom company, and read that it was a Victorian favorite, and has a Mexican origin. Even better it seems like if kept protected from any extreme cold snaps in winter will come back each summer, since they are what is called a “tender perennial”, and Austin is right at the funky borderline of where things can potentially get hurt from frost. Pinky white (yes, pearly) blooms… since I planted these so late in spring, they may not appear until late fall, but perhaps that’s when they bloom here anyway.

Regal Lily. Lilium regale. This lily, I read, was discovered in China in the early 1900s and became the parent of many trumpet lilies. This is sensitive to frosts as well, and also sensitive to high heats, both of which happen in Austin. We’ll see.

Canna. For lack of space, I bought an already potted bright yellow canna and put it in a large container planting on my deck. It bloomed but then started getting munched on by something. I’m slow to kill bugs so I released a bunch of ladybugs on it in hopes that they might munch on whatever was munching. I just hope I can keep it moist enough during the summer. The canna bulbs I bought, however, were much subtler–palest yellow with apricot blooms, and more of an heirloom variety.

Calla. Zantedeschia. I planted both white and yellow calla bulbs last spring, they grew and bloomed within 2 months. Right now the leaves are still growing. I’ve seen other callas blooming now, so perhaps I have a late blooming variety? Don’t remember the exact kind I planted but I think I picked at least one mini-variety, one of which was named “Crystal Blush”. It lived up to its name last year.

Except for the wide swath of oxblood lilies down my driveway, and the rainlilies that grow out in my front yard, which I’ve watched come and go a few times now, the bulbs above are all a big “we’ll see”. Yes, we’ll see. My motto. At least to see some of these flowers once will let me know if I want to see them again.

A very good article about Narcissus types, planting and naturalizing in Texas or the South.

A glossary that helped me.