Since starting this blog, I realized I’ve not written one single thing about wildflowers. My secret passion. Wildflowers are what started my interest in gardening. I’m now about 17 months into my gardening adventures. This makes me still a very new gardener. I realized this week with all my mistakes, and attempts to make something out of the extremely hard and dry clay soil of most of the land around my house, that I need a tiller, and not the little $20 hand tool, but something with a motor. That must make me an official gardener.

Or could it be the fact that I spent about 10 hours earlier this week making compost? Surely that makes me an official gardener. And officially obsessed.

What really got me obsessed are wildflowers. It all started when I drove by this strange little bird-flittering, butterfly-twirling patch of wildflowers, dead trees and half-grown grass in a neighborhood north of mine. I had to stop and turn around. It was mystery itself, contained in about a 50 square foot area. It looked wild but carefully wild. Someone had made it that way, and the life in it just buzzed. I do not like formal gardens, and maybe that is what I thought gardens had to be. And now I saw something that made me want to put life in my yard. (By now I have tried all sorts of plants and design arrangements but for the first 6 months I remained totally obsessed with native wildflowers and grass.) Just one month earlier I had decided that it was time to do something about the barren back yard of mine. I had never planted a flower in my life. Really.

What I wanted was wildflowers. I had no idea what it took to do something from seed, but I sowed them in January, then in March. No wildflowers came up. But I kept researching. And finally last fall, I decided to do what all the advice said, and that was to sow wildflowers in fall.

Some I sowed intentionally into beds. Others I tossed around the dirt that was trying to become a buffalograss lawn (still not exactly a lawn but I’m not giving up). Some, the ones I knew I absolutely wanted and would just hate to see not germinate, I bought as plants. (These included bluebonnets, California poppies, pink evening primrose and winecups.) But just for good measure I sowed seeds of those as well.

How excited it was when in February I started noticing green things start germinating. I wasn’t sure what was weeds and what was wildflowers. But as March arrived, I saw that not only had I succeeded but more flowers had germinated than I suspected. Late March my bluebonnet plants bloomed, and also many came up from seed, some in total shade. Then came the Indian Blankets, which have just started blooming this month. Three days ago, the scarlet sage bloomed for the first time. I had forgotten I sowed these at all. 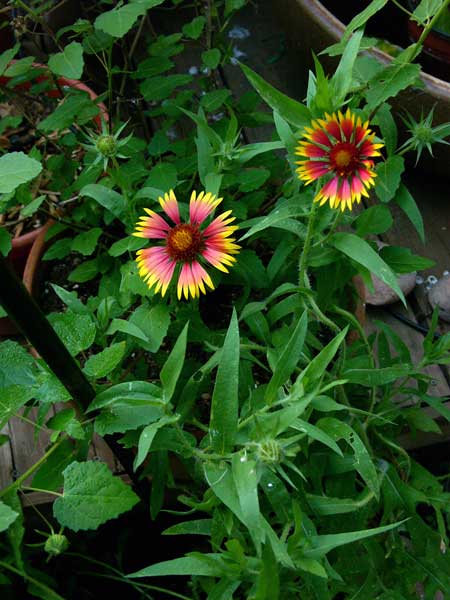 The planted pink evening primrose started blooming last month, but now the seeded ones are starting to bloom as well. The flowers are random, oddly placed and definitely going to need rethinking next year. Some are taller than I expected. I have one Indian Blanket plant that is nearly up to my chest. It looks quite odd right in the middle of the yard.

Purple coneflower were one of the plants I desperately wanted and although I could buy plants at the store, really wanted the native kind. I had a huge bag of these. During my research it seemed like they needed all these finicky conditions to germinate, but these had the most success. The purple coneflower seed, which I put in my herb bed and kept somewhat moist throughout the winter, poked its first little green leaves up in March, and the plants are now about 6″ tall. I had to keep thinning them out (in other words, picking some of them out and throwing them away, which I think is probably one of the hardest things to do in gardening–all that work! all those seeds!–but a job that needs to be done or else other plants won’t live).

As equally surprising were the Maximilian Sunflowers. I had a particular spot I really wanted them. I did nothing special to the soil, but scattered the seeds around and tried my best to keep them moist during the winter. They were among the first to germinate. Now I am worried that they are too big, too much for that spot. They are nearly 4 feet tall and have at least another foot or so to go.

What didn’t germinate? Maybe because of wet soil conditions, or simply being crowded out by others:

Although oddly placed and, well, wild, the wildflowers have already turned my backyard into a bird and butterfly sanctuary. I’d love to say all the birds are welcome but the grackles decided to build a nest in our cedar tree and are now training all their little chicks how to swoop down and drink water and eat worms in my yard (and poop all over my deck). Wild is good but next year I’m going to tame things down.