Better late than never, I’ve been wanting to get around to writing about our adventures in garden design this past year. Last summer was a long and infamously hot drought-filled summer, so much so that by the time we finished our backyard hardscaping, I was too tired (and too hot) to write. Thankfully, armed with my new SLR camera, my husband and I took hundreds of pictures.

When we first moved into our house, it was the backyard that sold me. Nothing special to some people but for this neighborhood it has a long yard, which is nearly twice the size of our house. Most of the original platted properties in this neighborhood have been divided into two lots in the last 20 years. Everything about this house and the yard had its original touch, and the last two previous owners had added nothing major but they had cared for it lovingly.

When I first saw the backyard while walking through the alley behind it, it was mysterious, covered in trees and shrubs and rolling green. It had recently been sowed with annual rye grass, but most of what was grass was (as I later discovered) annual weeds and horseherb. (This is now sought out as an alternative local groundcover, and my relationship with it has grown from love/hate to ambivalence.)

Most of all, the thing that I saw was mystery. It had a lovely shaded grove quality that somehow reminded me of my grandmother. And I’ve since learned that “grandmother memory” is often the beginning of great gardening impulses.

These were the realtor photos taken of our house before we bought it. Rustic and farmy? Definitely. Just like my grandmother’s land.

It seemed destined to be my space, destined to have me in it and tending its mysterious quality. After two years of serious gardening efforts, and many failures, and the rapid disappearance of most of what was “grass” or weeds, what I was left with 6 to 8 months out of the year was bare dirt. 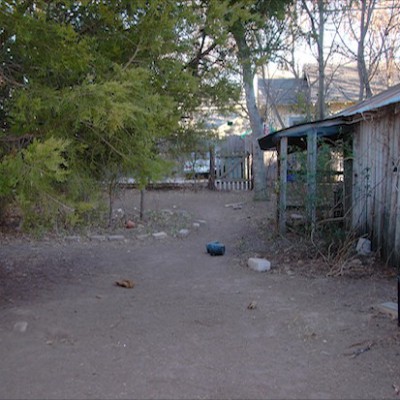 January 2006 and April 2007. The brief history of my garden for the first 2 years: barren/lush, barren/lush.

In spring when all the weeds would take off and the chinaberries leaf out, it seemed as if my garden would return to the dreamy hidden space that I loved about the house. I could barely see through the thicket of the backyard. And during those first two years, our dog ran free through the backyard, her well-trodden paths removing all hope of maintaining any ground cover. (Our dogs now have to stick to the side-yard.)

I had no clue how to start, never having gardened before, and even tried to sow grass seed in January (thinking it would just sprout right away!) In February 2006, almost a year after moving in, I made my first ever attempt at landscaping. My friend Whitney took me to the Natural Gardener, a lovely organic nursery and ranch-like garden in Hill Country Austin, for the first time and I fell in love. Even being mid-winter, the place was still gorgeous. We left with 10 bags of good soil, and when I got home, she helped me line the backyard fence with a couple of beds, edging it with a pallet of flagstone, digging in the good dirt and planting wildflowers.

That first summer my little beds started out great, but there was a long drought and most everything looked wretched by fall. I was learning that summer here is not kind to a garden. 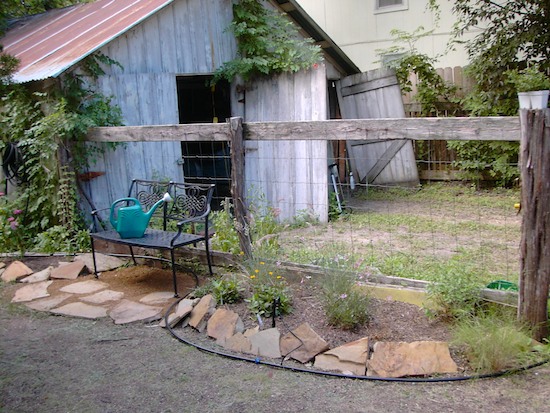 Since I have no grass, and late summer and winter looked so barren, I realized over the next year I knew I needed what gardeners call “bones” in the garden, something to frame things, hardscape. Gardening magazines didn’t help either, as the most beautiful gardens, even the most natural looking ones, had trellises, pathways, arbors, garden sculptures, bed edging, architectural stuff that draws the eye and keeps things in bounds.

The first thing that I was unsatisfied with was the porch in the backyard, which had been built just a few months before we bought the house, in order to make it more sell-able. Over a year, the porch began to warp and boards came up from their nails. It is also one of the few places that was mostly sun all day, and with no shade, no one ever wanted to sit there. So I tried covering it with pots and planting things around it but it felt too big and imposing in our yard, a big unsubtle statement that just didn’t fit with how I saw things.

Not the greatest photo, and it only captures about a third of the porch size, but like my crispy bougainvillea, you get the idea of what it feels like to sit here mid-summer.

So I began to dream of replacing it with ground-level stone patio, and we hired the original contractors to come out and tear it out. I tried to draw up the patio I wanted but after seeing the price they wanted for a new one, I balked. Then the contractor didn’t want to lay the patio in sand, only mortar or an inflexible synthetic material. I just didn’t want concrete in my backyard! 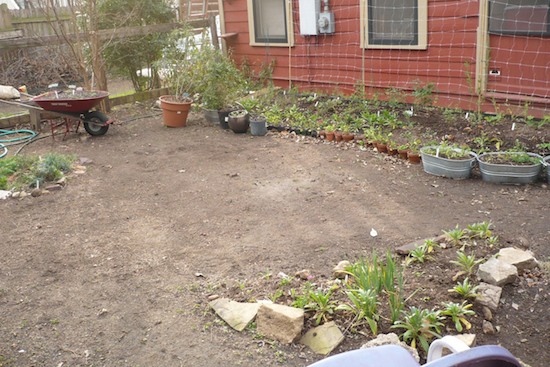 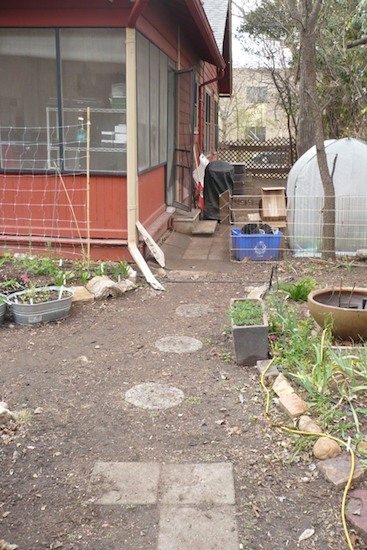 After the porch was taken out, I tried to draw the area immediately behind our house, as I saw it in my mind. I’m not good with drawing, but you can see my humble beginnings at design.

And how difficult it was to convince someone to do it this way. Most of the stone and brick patios I saw and adored in Sunset magazine and Fine Gardening were all laid in sand. Our friends in northern England laid an entire beautiful brick patio in sand, and on a recent visit I never saw a stone area in concrete. Maybe it’s a Texas thing. From the time we had the wood porch pulled out and found a new contractor, it was nearly a year of facing this blank dirt backyard.

Unfortunately, we had no builder friends here or someone who was capable of such a thing and while we’re not against doing it yourself, we just had no idea how to start. So we bit the bullet and decided to spend whatever it took to do it right. The advantage of working with a contractor is that you have multiple people on the job and what might take a few months takes a few weeks.

I wanted to get things done by the fall so I could plant most of my foundational plantings–perennials, trees, roses–then. I’d learned that the best perennials of any sort are usually fall-planted. Spring is a difficult planting time in Texas, the plants don’t get enough time to establish themselves before an onslaught of heat, and they need a lot more care to make it through their first summer.

Thankfully, through a friend we found a contractor who came up with some great ideas and worked with our wacky desire to have no concrete (in spite of the fact that one of their main businesses is concrete).

Stay tuned for part two–or how to keep your wits about you when drills, saws and lots of people are building on your tiny piece of property for 8 hours a day. (Or should I say, how I wonder how others keep their wits.)