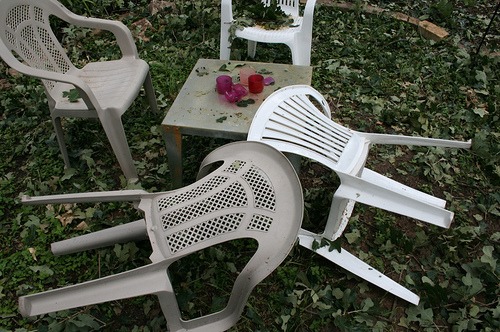 The summer started out with a bang, literally. Bangs and bangs of hail. We had 3 separate hail storms within three weeks of each other, each one with progressively larger hail. It was the third storm that did me in. Or my garden, I should say. I think it was a near tornado. Two weeks ago, we were out late at night looking at a house our friends are thinking of buying, and suddenly the sky was filled with heat lightning and a strange yellowish light that seasoned weather veterans know as tornado skies.

Just the night before we had about 6 inches of rain, and it didn’t seem like the rain was going to end. By midnight the lightning was frenetic, the wind picking up and once safely in our house the hail started–enormous, golf ball-sized hail that cracking and whipping at our house. From the inside it looked as if the hail was being thrown sideways, not just falling from the sky.

It was all pretty exhilarating while it lasted but then I woke up to see my poor, poor garden. It seemed like the pecan trees lost half their leaves. Twigs, branches and leaves blanketed our entire driveway and yard in every direction. Many plants were chopped in half, stripped and shredded. My poor Louisiana irises, which had been blooming happily 2 weeks earlier, looked as if someone took pinking shears to them. The sago palms in front (which I never liked anyway)–shredded. All the tops of my tomato plants were completely severed off, before their peak harvest.

It was already beginning to feel like time to transition the garden from spring to summer, and up till now we’d been enjoying breezy skies and the occasional hot day in the 90s. But just two days after the storm, the weather shot up to the mid-90s. No more nice cooling rain, no more bearable afternoons outdoors. I can’t tell you how much it stinks being outside in the mid-afternoon in a Texas summer. There is no point to it. Between the hail and heat, it was as if my garden went from paradise to desert overnight.