first of the daffodils

This past fall I went on a bit of a daffodil buying craze. Daffodils were amongst the first flowers to bloom when we bought this house–pretty little creamy flowers that I knew as ‘buttercups’ when I was a kid. I later discovered that the particular kind I have growing in odd places, along the driveway, hidden behind our shed, were remnants from an old time, when our property was probably connected by family to the neighbor’s property, as the daffodils seem to have been planted in places that had no regard for property lines.

My ‘buttercups’ are known as ‘Grand Primo’, a type of ‘tazetta’ daffodil that grows around old homes in the South. Only recently has a person actually been able to buy this particular daffodil, but it has spread and survived without much intervention, like a wildflower for decades.

This year i decided to find out what else I could grow here, and I quickly got lost in the maze of daffodil nomenclature. I studied catalogs to try and figure out what divisions were, why certain kinds bloom better in the south than others, and of course the hundreds of varieties that are basically small white or yellow flowers with little (or big cups). No, you can’t get purple or blue daffodils, like you can with tulips. And it seems people have tried to make pink but in most sunshine the pink wants to be orangey yellow.

I’m not really into yellows or oranges much in my garden. I tried a bold yellow canna last summer, and it was pretty but overall, the sunlight here is so yellow anyway and especially by midsummer one’s eyes just want to see cooler colors. But daffodils are something else. They’re sweet, they’re… buttery.

I know them as buttercups, some know them as daffodils, others call them jonquils. And to make things clear, all daffodils are technically called ‘narcissus’ in the Latin way of naming things, and in some places that’s what they’re called in common talk, But for some reason, I persist in calling them daffodils and buttercups.

And they flower, at least in Texas, from as early as December all the way through April. I discovered that the daffodils that bloom best and return best here are usually early bloomers, since the later spring weather is much too hot for them. In addition, some of the later bloomers usually want a longer winter than we have–they like the cold and wish they had it all the way till April.

Anyhow, of the many types of daffodils I planted, the first that appear in warmer winter gardens are the the tazettas, or their close relatives the paperwhites. Most people don’t plant paperwhites outdoors, but force them to bloom indoors, and I did both.

Usually the very first daffodil to bloom in Austin is the tazetta called Chinese Sacred Lily. I planted several of these in fall, but they should have bloomed a month ago, and I suspect I put them in either too much shade or planted them too late, so all that grew are a bunch of leaves that are now flopping all over my garden bed. 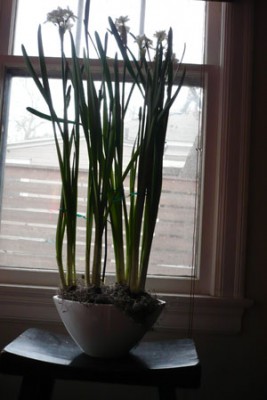 The next to flower are the paperwhites. So my very first daffodils, ta-da, were these pretty little white flowers pictured here, that I potted indoors. Some people will tell you their fragrant is a bit off-putting, and there’s something to that. I potted a paperwhite in November called “Galilee”, and it began blooming by Christmas. Up close the fragrance was sweet and like baby powder, but from several feet away had the faint smell of animal musk (or even animal pee). And these also grew so tall, nearly 3 feet tall, that before they had to bloom the stalks were flopping all over the place.

I read this would happen, so I immediately got online and ordered another round of paperwhites, this time a different kind called “Nir”, which is supposedly a little less musky and supposed to bloom about 12-14 inches. Alas, by the time these new bulbs flowered, they too had reached about 2 feet high. Determined to get it right, I potted a third round and left them outdoors until the bloom stalks started popping up. True enough, the cooler weather seems to inspire them to stay shorter. (Note to self: impossible to start paperwhite indoors, room temperatures are just too hot and they grow too fast.) True to their description, these are a lot less musky, and the individual flowers are even bigger. But my husband still thinks they’re stinky.

The most popular paperwhites, by the way, are largely grown and hybridized in Israel, which has the ideal climate for narcissus growing. The original tazetta is native to Israel, as well as many parts of the Mediterranean. This is why all the paperwhites on the market have place names like Galilee and Jerusalem, and personal Hebrew names like Inball, Nir, and Ariel. That alone sold me on trying these out. I’m fascinated with many things Israel, especially its wildflowers and its many distinct climates, ranging from tropical to desert, all packed into such a tiny country. There are parts of Israel that are very much like Austin, especially our hill country.

The leaves of the next round of daffodils have been sprouting up outside, and the very first bloomed today–Rijnveld’s Early Sensation–a “jonquilla” daffodil. which is supposed to be one of the few larger flowered ‘jonquils’ that actually bloom here (since, as the name says, they blooms so early).