Today is daffodil day. In my garden, it’s a moment when the very early tazettas are just past their peak and the early bloomers are in full bloom. In the fall of 2007, I went a little crazy with daffodil bulbs; I didn’t understand the differences so I ordered a bunch that were recommended by Scott Ogden’s Garden Bulbs for the South, and then threw in a few non-returning daffodils just for the fun of it. Pink daffodils! I had to try them! At the time, I didn’t have anywhere permanent to put most of them; our property was very shaded from buildings and fences and such and the little garden bed space I had I wanted for more permanent things. So I used planters, and a lot of them, wheeling daffodils around to show off when they came in bloom and wheeling them away when they became a mess of leaves.

And I mean literally wheeled: I transformed an old rusting wheelbarrow into a tulip-and-daffodil show, and moved it around like changing furniture in my backyard.

I didn’t have time to plant disposable bulbs this year and while I liked all my pot displays, it was a little too mish-mash. I also have much more sun, now that all the evergreen ligustrums and privets are gone from the backyard. So I moved around some of the potted bulbs to more permanent positions and bought some more of the known returners.

The first narcissus to bloom were the Chinese Sacred Lilies, which I planted last year but languished in the shade. In the spring I threw them in a pot which ended up in a neglected shady corner with a bunch of garden tools. I had forgotten all about them until Christmas, when I was raking up debris and noticed leaves and buds popping up in the abandoned pot. I will definitely have to move them again so they have a more permanent spot in the sun next year. They have a delightful fragrance, citrusy and warm and not at all cloying like other tazettas.

Tazetta hybrids are the first blooming daffodils in the garden. They do not need to be chilled and shouldn’t be as they prefer warmer climates and bloom in mild winters. Some of the Galilee paperwhites (tazetta relatives) that I planted outdoors last year came up last month, but they’re all leaves. 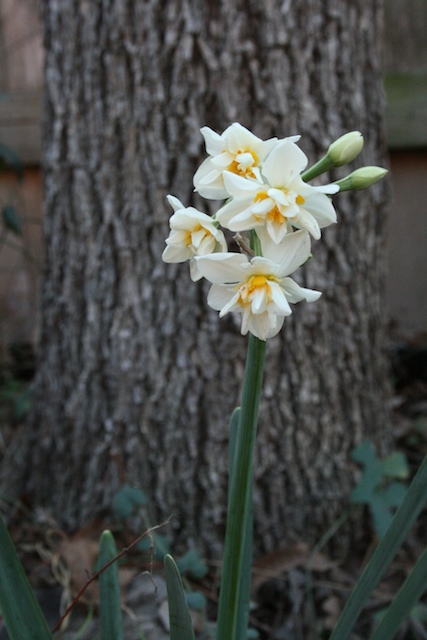 A new surprise this year was a lone bloom of a tazetta I believe to be “Double Roman”–at least my research tells me this is what it is–because I’ve never planted anything here. It has very double blooms with bright yellow centers. There is a similar tazetta called Erlicheer but this not only blooms a month earlier it seems more yellow. 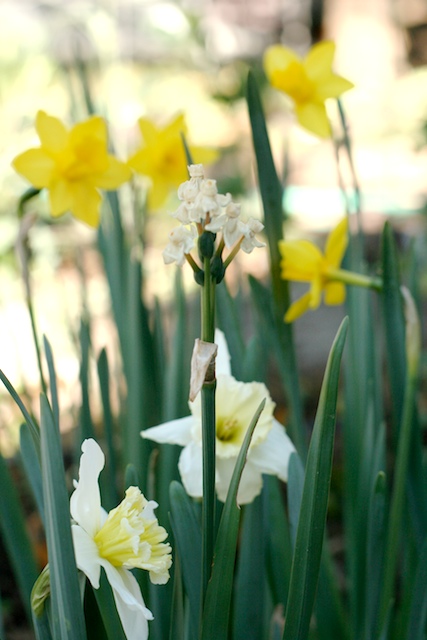 a fading Grand Primo in front of Ice Follies and Sweetness

Next to bloom in my garden is Grand Primo, a tazetta which is usually the first sight of daffodils in old neighborhoods. Mine start blooming around early February, although they have occasionally bloomed in January. This year some of mine came up the first of February and a few are still blooming now, although they have reached their peak. I have hundreds of these planted from a previous owner, and spent some time last year dividing and moving them around.

At the same time Grand Primo started blooming, another new beauty showed up in the shade of a thicket of privets. This unidentified yellow tazetta has bright orangey cups and has never bloomed before in my garden. This year I had two new gifts from a previous owner!

Erlicheer follows shortly after, another tazetta which is descended from Grand Primo and is returning from last year. This strongly-fragranced tazetta has very double blooms and is in full bloom right now.

Simultaneous with Erlicheer is Avalanche, a tazetta that is returning in my garden for the second year, and the wild Jonquil, Narcissus jonquilla. Avalanche is very similar to Grand Primo, although I like the colors much better, with its very crisp white-and-yellow classic daffodil look. Its fragrance seems a little less musky as well.

The wild jonquil is such a tiny thing and this is a new bulb this year so I don’t know if it will return, but I have planted the “Early Louisiana” strain which is the old-fashioned strain that persists in the south. Today another one bloomed–and I will have to have a lot more of these to make any sort of visual statement, but they are far and away the most gorgeous smelling narcissus, a strong fruity fragrance that is almost like hyacinth.

Now that the tazettas and most of the very early bloomers have reached their peak, the early-spring narcissus are taking stage. This past week both Ice Follies and Sweetness appeared together in one of my borders. 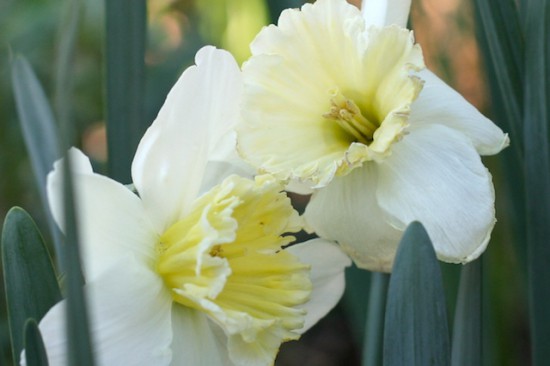 Ice Follies is returning for a second year. According to Scott Ogden, it is one of the best of the large-cupped (Division 2) daffodils for Texas–as too many of them bloom too late or need more chilling to return. It is by far the largest and most dramatic narcissus in my garden.

Sweetness is a jonquil and a new planting in my garden, and as its name suggests has a lovely fragrance; although not as potent as the wild jonquil, it seems like this fragrance and those of other jonquil hybrids have much more fruity notes than the powdery musk of tazettas.

Carlton, a classic daffodil look that is nearly indistinguishable from Sweetness, but it has larger flowers and little fragrance

I planted two other early-blooming large-trumpet kinds in the fall, Carlton and Saint Keverne. Both were on a list of returning favorites by a Gulf-Coast gardener, which I am not, but I figured it was worth it to try them. Only problem is, at the moment I can’t remember which one is where, or perhaps I put them together! But one of them reached its absolute glory this morning.

Still yet to bloom is Geranium, a new planting and a tazetta that blooms later than most, and Trevithian, a large and mid-spring jonquil which I planted last year and struggled to come up in the drought. The leaves are up, though!

The best daffodils for growing in Central Texas are usually tazettas and a few jonquils. Not all of them return, however, and not just because of our weather but because of our soils. Narcissus usually multiply and like it when the soil is dry in summer and can rot in heavy clay soils like ours. But the few returners, like Grand Primo and its cousins, have been carrying on in the south’s clay soil for many many years. Other daffodil types, like the large-cupped kinds, often bloom later and when it is too hot here, and also need a longer winter to bloom properly. Still there are a few early blooming types of these kinds which are worth a try but they may only make a show for one or two years and then disappear.

And for a parting shot, here is my newly planted lavender hedge (3rd time trying lavender!), with Carlton daffodils in bloom. And you can see at the very front, a tiny wild jonquil to give you an idea of its size compared with a medium-flowered daffodil and the 4-inch tall baby lavenders.