I am so excited to begin my second full year of wildflower sowing. I had to pull many plants out over the summer before they went to seed because they were just growing in odd areas–like the 7-foot sunflower that grew right in the middle of the backyard. That was definitely not planned… I attribute it to one of the ‘wildflower mixes’ that i threw out in the summer before I knew what I was doing. I was sad to see it go because I never got to see it flower. It was nice, but a bit of an obstacle for my friends who were helping me water all summer.

Anyhow, I had beautiful bluebonnets all spring and as a result now have so many bluebonnet seeds that I can afford to scatter a bunch of them about and let them grow if they want to, or not. There are some areas, however that I’d really like to see them and those areas need a little more “insurance”.

The best bluebonnets I got last year were from nursery transplants. Many nurseries here sell them this time of year. Nice-size transplants are good insurance. They get rooted in the ground, don’t grow much until mid-to-late February, when they take off, and then usually start blooming in March. (Mine started blooming in late February.)

Last year I threw a ton of wildflower seeds out, and of the bluebonnets only a few germinated in fall. The rest of them started germinating just as most of their season had passed. Although they germinated and began growing quickly with the abundant rains of this year’s spring, they didn’t start blooming until early May, at which point it is really too hot to have lasting bluebonnets.

Bluebonnets aren’t like California poppies or Drummond phlox or Indian Blanket, which can germinate in a couple of days with a little bit of watering. They have a tough seed coat, and in the wild, like many wildflowers, they throw their seeds out and some don’t germinate for couple years–until weather shifts and rain and cold and hot break them down.

And so even though most advice says to sow in fall, some smart gardeners let their bluebonnets go to seed in June and at this time they collect the seeds and scatter them about so they have a head-start on germinating over the summer. This is their natural sowing time, after all.

Still, even with this method, you are dependent on rain and weather conditions and your own patience!

Since I have limited space, not a big wildflower pasture, I really want to make sure they grow in certain areas. Rather than buy transplants this year, I’m trying a much easier and cheaper way. Bluebonnets made easy! This fall I tried something different; instead of just throwing out all the seeds I collected from last year’s flowers, I decided to ‘scarify’ them first. There are different methods of scarifying, but basically this means doing something artificial to get the seed coat to break down so they germinate quicker.

I got my scarifying idea from a brochure at the Wildflower Center. First, I stuck them in the freezer for about 24 hours. The next day I pulled them out, dumped them in a coffee cup and then poured boiling water on them, just barely covering the seeds, and let them sit in the cup for a couple hours as the water cooled off. (Yes, boiling water. This didn’t hurt them.) Then I poured them out into a paper towel, squeezed out most of the water and went outside to do my sowing, just pressing them into the top of the soil.

Within 5 days almost all of them germinated, and exactly where I wanted them. It’s been a week and a half since I sowed them, and here is what they look like: 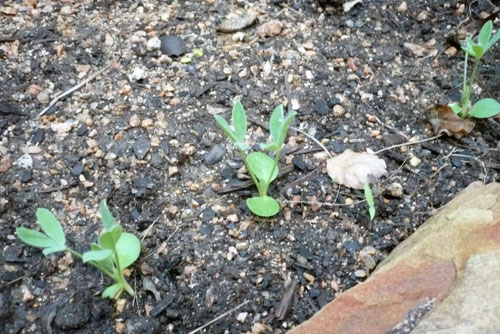 They will be a nice size before November, almost the same size as the transplants I put in last year, so hopefully I’ll get lovely bluebonnets again! I should mention I keep these seedlings moist, which is no easy task right now. After this year’s intense rainy summer, Texas has decided to give us a fall drought. I still have tons left of bluebonnet seeds so I’ve thrown the rest about, just as I did last year… and they can come as they wish.

I wouldn’t recommend this method for large-scale sowing because it loses some of the mystery of wildflower-growing (and in the case of bluebonnets, security measures against bad weather in the form of hard coats).