a winter break from the garden 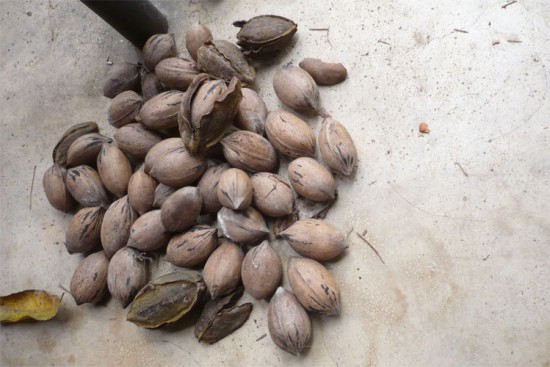 The pecans this year seemed to multiply. I was still picking them up last week after the first drop 2 months ago.

This past fall has been my busiest gardening season ever. I’ve tried to be a diligent note-keeper (and now I know why all those gardening books urge one to keep records!), just to keep track of not only the myriads of landscaping changes we made, but the hundreds of new plants that came into this ever-changing universe of my garden.

Our first big decision was to rip out the deck that occupied our back yard. It was far too large in proportion to my back yard, in addition to occupying the only area of full sun in my entire garden. No one ever sat on this huge deck anyway, as the sun in the summer is just too overwhelming. When taking a friend back into my garden this summer and sharing with her some changes I was thinking of making, she simply said, “Yes, you need more… French.” Firstly, she is English and for her that meant the same to me: something more hidden, more lush, more ‘garden-y” than just a bunch of right angles in a big Texas deck.

In addition to building about four new beds, I went about dreaming of the plants that would occupy them. I’ve gotten a bit obsessed with seed-starting this year, and I have more to share on all that, but the short version is by October I had over 500 plants that I had started from seed. Many of them were spring annuals, and I am currently fascinated with the ‘changeable’ garden that annuals provide. I had never considered many annuals, not knowing much about them other than the vast tables of the usual homogenous plants at my favorite garden center. There was so much out there to be discovered by seed. I read bunches about sweet peas, and dianthus, and a number of other fragrant flowers that are often considered “cottage garden” flowers.

My sweet pea adventure indeed got out of control. I had no idea where to start and so I ordered many packets of them, curious to find out which kinds might do well here. They all germinated well and I was able to spread them across the new large flower bed that occupied much of the space that was once the deck. Others I tucked in around various other plants.

And strangely enough, my first sweet pea bloomed this week! Sweet peas don’t normally bloom till March but we have had strange weather indeed, and a very beautiful, warm spell all last week with the faint southerly breeze of the Gulf Coast in the air. This is an antique variety named “Painted Lady”. Although, yes, barely bigger than a pea itself, the bloom is so intensely candy-sweet and fragrant. I’ve never quite smelled anything like it.

Traditionally, I’ve learned, fall is the best time in Texas to plant all spring-blooming annual flowers and almost anything perennial, whether herbs or flowers, or shrubs like roses. This is so plants get a good time to root themselves in over the winter in order to have stronger growth in spring before the heat sets in. It’s when I sow all my wildflowers as well. I’ve learned the hard way that I don’t live in a climate where I can sow many seeds outdoors after frost, as most seed packets inform you to do. Spring here is just too short, and by the time a plant starts germinating it won’t have a change to bloom. My first year of gardening I tried this with several poppies, and they grew all right and started shooting out leaves but at the first hot day most of them began to choke.

If I could offer one piece of advice to a new Texas gardener, it would be to sow most of your seeds in fall, so that plants have a change to grow or settle in by November. October has been the best month for me to do this. This of course doesn’t include all seeds, such as summer-blooming annuals which are not winter-hardy: zinnias, cosmos, and some others.

The most difficult job, however, of this past fall, has not been all the planting and the new landscaping–it was the total lack of rain. We had about 2 good days of rain between September and November. And since Thanksgiving it’s probably rained once. I picked one of the hottest and drought-iest falls to start a foundational garden.

In spite of all this work, I’ve tried my best to keep up with my own projects, and even on this website am starting to list all the flowers, vegetables and shrubs I’ve planted in the “plantopia” section. Here is a small album of some of my recent blooms and projects: