Last fall I picked a special day just to look for roses. I had built up to this moment for a few weeks–the revelation that I could grow roses came as a little surprise because up till this point I was obsessed with small plants, seeds and mostly native things. Roses were just so… rose. I had no idea what to look for, but knew I was on a trip not just to buy plants but something of a long-term investment–kind of like buying a formal dress. I was a bit overwhelmed by all the choices and kept coming back to this rose. I liked the soft pink, so delicate. At the time I bought the plant, the petals were flat and lose and looked “open face” almost like apple blossoms.

Comments Off on Ruby Crystals grass

My very first garden bed was an intentionally “xeric” bed. I wanted to plant either all natives or drought-tolerant plants. At the time I thought I would have an entire garden filled with plants that needed no or very little watering. (That was before I caught the serious gardening bug, scouring plant catalogs and wanting things that were beyond Texas’ ability to handle.)

A nursery in Austin has a great selection of all kinds of bunch grasses, and I found these beautiful plants–something different than the usual grasses with their very pink seed-heads. They ended up being the only plant that looked good all summer long, while everything else went dormant or dead. (They are African natives… so maybe I should keep thinking Africa, not English garden!)

By fall, however, the 2 plants had already seeded into other parts of the bed and beyond, and were growing their own little bunch-grass spoutlings–at least 10-15 new plants are now growing up to 12 inches high. So beware. This plant spreads! And I have other wildflowers amongst it so I have to keep picking them out. But it’s worth keeping this pretty plant just for the summer color.

Supposedly frost-tender, this plant lived through winter with no protection, but we did not have any extended freezes so perhaps it just depends on the year.

END_OF_DOCUMENT_TOKEN_TO_BE_REPLACED

Comments Off on seedstarting part 3

This past 2 weeks I finally was able to put out most of my seedlings and transplant them into the garden. I had 2 trays of cosmos and one of zinnia, most of which were getting so large the roots were growing out of the pot. I was a bit worried about putting them into the ground; what if they just didn’t like the transfer out into different dirt or the intense humidity we’ve been having?

There’s nothing like starting something from seed and then finally watching it bloom in your garden bed. For a first-time gardener, these blooms are truly miraculous. After a week or so of being in their own little bed the cosmos are flowering, and the zinnias all have ready-to-open buds on them.

END_OF_DOCUMENT_TOKEN_TO_BE_REPLACED

Comments Off on my bougainvillea adventures, continued

Last spring, when I started a blog for my garden, I wrote about my bougainvillea. I bought a topiary-shaped plant which was much different than all the usual bougainvilleas I see around here. At the time, I didn’t know a marigold from a vine, so everything and anything that had color was worth buying.

After 2 glorious weeks as the star of our back deck, my beautiful topiary struggled. I quickly discovered (as I wrote in an earlier post) the problem of bringing home plants that have been nursed in careful conditions, only to toss them to a new gardener’s whimsy. After fertilizing it some, it shot out new blooms but last summer just did it in. I’m not sure if it was the black plastic pot that sat every day in full sun through our droughty summer. Perhaps that baked its roots. It got enough water, a big dose every time it started to feel dry. But I was worried about overwatering it so perhaps I didn’t water it enough. It seems like anything in containers doesn’t stand a chance in August unless watered every day.

I have not the heart to throw this plant away. I pruned it down and repotted it, and it is sitting on my porch. I believe in resurrection so I’m giving it a chance. But at the moment there’s no sign of life.

I decided to try again with a new bougainvillea, this time a small hanging plant. All my friends love it, this big splash that greets them as soon as they arrive. But now I’m just not sure about bougainvilleas. They beckon from all the nurseries right now–a spring plant-star with their bright shower of color all over every plant. Perhaps it’s that they’re everywhere and maybe I don’t like obvious. But also one good windy day sends their pink bracts all over the yard, which is cool at first but then the plant looks all scrawny and colorless until it’s willing to grow again. Kind of like a scratchy rose bush without any blooms.

So there’s where me and bougainvillea stand right now. One dead, one alive but completely colorless, and downgraded from its star position.

update:: september 18, 2007. I came back this summer to find bougainvillea #2 dead. Dead dead. A friend of mine watered my plants nearly every day, but I forgot to put the bougainvillea out with the other containers so I think it was neglected. We got tons of rain, too, which should have kept it somewhat going. The previous bougainvillea rotted in its pot, so I replaced it with some nice spanish lavender, which is currently not looking so hot–it’s really really fussy about all the rain we got this summer. (Lavender likes to be dry.)

Comments Off on "Walking Apostle" Iris

This plant was a lovely gift from our neighbor the day we moved into our house. The first spring I don’t think it bloomed but the next year it came up repeatedly in the spring, starting around late April or May. The blooms were very short-lived and usually responded to rain, or fell off with wind–and I like that. It’s got that kind of rarefied beauty that orchids have, and flowers like that should have mystery to when and how long they appear. I like that you might possibly miss them if you don’t happen to look at the right time.

I’ve got this plant down in a nondescript patch where there is mostly St. Augustine grass. No special soil (just thick clay), or special watering. It doesn’t seem to mind. It keeps its leaves throughout the year too, like other irises… I’m noting this because I’d like to have more irises in places that usually just end up looking like brown dirt most of the year.

Comments Off on Passionflower "Incense"

A year after we were married we and a group of friends walked on an ancient pilgrimage path in northern Spain. Just before our arrival in Pamplona, we passed by a fence that was covered in passionflower vines. I stopped the entire group–about 12 of us–to marvel at just one of the flowers. All those tricks, special tricks, wheels and spins. It was a theatrical flower. Each bloom could’ve been a circus if it wasn’t purple.

After moving to Texas, I was surprised to learn that passionflowers were native here; I’d never seen anything like them in the midwest. So this passionflower holds the distinction of being the very first plant I bought to put in my garden.

This particular vine, I’ve since discovered, is different from the ‘passiflora incarnata’ that has big leaves and big flowers. It’s more petite, the flowers a little less glamorous, but smells wonderful and grows fast just the same. The main thing about this plant is that it can disappear within a few days from happy caterpillars. It took a beating last spring, sent out just a few cute flowers before it was covered every morning in chomping critters. After research I found out of course that these caterpillars just love this plant; it is their main food source. By the end of summer, their leaves were totally gone and the rest of the plant looked straggly in the heat.

I would love to have a plant for myself, and have read that some people buy extras–one for the butterflies and one for them. 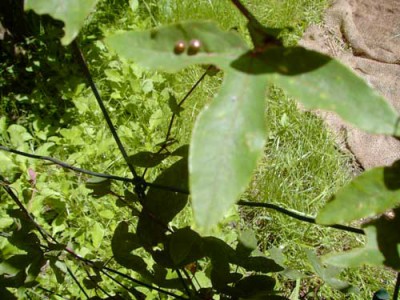 When I received my first wildflower seed catalog, gaura (also known as “Appleblossom Grass”) was the first plant I fell in love with. I sowed the native Texas variety from seed last fall (which is showing leaves in various parts of my yard now). “Siskyou Pink” is the first variety I planted, in spring of 2006, in my very first garden bed, which has now become my wildflower bed. It is supposed to be a hardy plant in summer but many perennials disappeared in the summer heat of August and September which still have not reappeared. I was surprised to see how much this plant had shriveled after a month-long trip away from Austin in the summer, but loved it so much that I went out and bought another that fall. END_OF_DOCUMENT_TOKEN_TO_BE_REPLACED

Comments Off on Horseherb, Straggler Daisy

The weed that grows everywhere! Can get up to about 12″ high at most, but easy to pick out, and some actually like this as a groundcover. I wrote all about this weed here.

Comments Off on Blue-eyed grass

I bought a few pots of this “grass” from a small local nursery, and within a week started seeing it everywhere… including the Wildflower Center, where its baby iris-like flowers unassumingly dot the edges of the center’s landscape. From a distance it looks like buffalograss, but up close is a little elegant world.

I looked it up but discovered there are many varieties of it that are native to the U.S. The plants I bought aren’t as scratchy looking as the Wildflower Center’s, but more of a bluish-green grass. END_OF_DOCUMENT_TOKEN_TO_BE_REPLACED

Comments Off on Heritage Rose

I am slowly building a rose bed that stretches across the side of our house. It was covered in Lantana, which is cute but smells funny when you cut it and just looks straggly in the middle of summer.

Right next to each other I have my relationships. A French rose, an English rose, and an American rose. They all look like their origins and have much to say about them. I won’t draw the metaphor out too much but I absolutely love this rose. It’s a David Austin rose, which means in rose lexicon “English rose”. It also means hardy rose, rose that is capable of much fragrance and tough circumstances like many antique roses.

I do think my English friends are that way. They are grounded in older things, have toughed out more; most friends my age had parents who lived through rations. And yet they stay so cheery, and rarely complain. There’s a certain propriety, which at times they sometimes mock themselves for, but I think it’s beautiful. Just like this rose–it’s a not-quite-peach not-quite-pink shell pink and just a perfect form, each petal lined up so neatly. There’s a primness yet a great big rosiness about it.

It’s also the tallest of the 3 and the most upright (I will get to my thoughts on the crazy sprawling ever-blooming American rose and the finicky but absolutely decadent French rose later). And the smell–like light cinnamon and spice. Not to say it is the only representative but I chose them to be. I’m already planning space for one or two more of this particular bush.

All my roses are still small so I can’t report on their regularity but so far I have to make this one my favorite because I love to just sit and stare at it. Doesn’t that make it all worthwhile?

As my English friends always say, “you’re just gorgeous!” Meaning, in every way.